States, local jurisdictions and borderlands in Europe and the Americas, c.1713-1914 is a free to attend international conference on the processes of state building in the 18th and 19th centuries. It will take place online via Zoom on the 1st and 2nd June 2021

“States, local jurisdictions and borderlands in Europe and the Americas, c.1713-1914” is an international conference organised by Luis Gabriel Galán-Guerrero and Shyam Sridar (University of Oxford) with the support of the Past & Present Society and the Latin American Centre, University of Oxford.

Throughout the 18th and 19th centuries, populations and settlers in Europe and the Americas set up a wide range of public offices, administrative bodies and corporations that asserted their own jurisdictions within monarchies and republics. In recent years, more nuanced interpretations on the process of state formation have highlighted the process of negotiation within republics and ‘composite monarchies’, and acknowledged the importance of corporations, legal pluralism, overlapping jurisdictions, local elites and borderlands in the functioning of the state.

This conference extends these existing lines of enquiry into the nature of states and aims to establish connections and comparisons on the processes of state-building on both sides of the Atlantic in the 18th and 19th centuries. It attempts to answer the following questions:

• How did administrative bodies negotiate, cooperate and conflict with local powers and jurisdictions in both Europe and the Americas?
• How and why did these interactions change from the 18th to the 19th centuries?
• What can the study of these relationships between public officers, corporations and different social groups in borderlands tell us about the nature of states in this period? 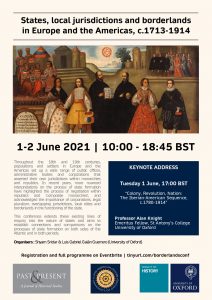 The poster for States, local jurisdictions and borderlands in Europe and the Americas, c.1713-1914 can be downloaded here.

Past & Present is pleased to support this event and supports other events like it. Applications for event funding are welcomed from scholars working in the field of historical studies at all stages in their careers.