“Who knew,” Lawrence Wright recently reported in The New Yorker, “that it was ever against the law to shoot pigs from balloons?” Well, it isn’t anymore, at least not in the state of Texas. “Texans already could legally shoot pigs from helicopters — even with machine guns” (as Wright pointed out), and now, as of this April, they are also allowed to hunt them from hot-air balloons. Could you ask for a more bewitching pastoral? Millions of wild pigs, bulky and ferocious as they sweep darkly across the state and mow down its grain; a flotilla of bright balloons; the snipers; the slaughter. 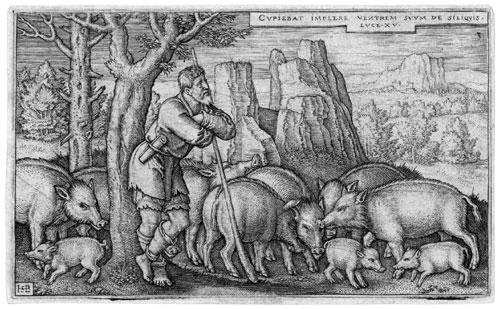 Pigs can be hazardous, and they have been for a long time: farmers and lawmakers have been devising new ways to manage them since antiquity. In my article for Past & Present, I zoom in on this pig-person dynamic as it played out in early medieval Gaul (what’s now France, western Germany and Switzerland), because I was surprised to find pigs making a dent in that kingdom’s laws, which are now nearly 1500 years old. These Gallic pigs, unlike their Texan kin, were more like invited guests than invaders: they were domesticated livestock, properties with a price even though they were free-ranging. But they still escaped and destroyed crops, and sometimes they even killed children. The challenge was how to raise them without doing too much damage in any direction. As a result, Gaul’s humans found themselves thinking a lot about the physical world and how its pieces interlocked.

So pigs had an impact on environments and law and economics a long time ago. But there is even more to their historical legacy and pop-culture persona. We have a complex and maybe even conflicted set of ideas about pigs, and that too is an inheritance from the Middle Ages.

Pigs are not pests in the way that roaches or rats are. Go ahead and Google the photos of Texas pigs-turned-trophies that happy hunters have posted: this is big game. And this is not the only way we exterminate Sus scrofa. Mostly, that happens through the food industry, a domain in which pigs are not combatants but are instead subjects of an ecstatic obsession. Pork is venerated in cooking high and low, from April Bloomfield’s A Girl and Her Pig and Fergus Henderson’s The Whole Beast to bacon-weave tacos courtesy of “Dude Foods.” It is Anthony Bourdain’s “favorite vegetable” and Homer Simpson’s “magical animal.” It might be more obvious to the pork-abstainers among us that sometimes this frenzy is orchestrated — like for instance how the A.V. Club had a short-lived bacon-themed series sponsored by HORMEL® Black Label® Bacon. But even lame corporate initiatives strike a chord when it comes to a flesh that a culture has already hallowed. So last year, when a pork concern commissioned a sculpture of country singer Chris Stapleton made entirely of bacon (besides some its Styrofoam base and gumball eyes), the publicity stunt was somewhat inscrutable, but it was also a social media hit.

That bust of bacon also points to a stranger side to our relationship with pigs. We industrialize and devour and fetishize them, but we also think that they’re relatable, and in an uncanny way, we really are what we eat. I’m thinking about more than meat statues or the unsettling iconography of humanoid pigs that graces the billboards of barbecue joints. When the pigs are still alive, we are drawn to stories of their intelligence and cuteness. Forty-one thousand people have apparently viewed an article entitled “15 Celebrities Who Have Pet Pigs.” 1.1 million people “like” Esther the Wonder Pig and the ways she has taught her owners about the capacities of her species. (Early lesson: plundering a kitchen full of closed cabinets is no problem when you’re a quarter-ton sow.) Almost 10 million views have been racked up by a video that ostensibly shows a pig rescuing a drowning goat, which is exactly what the comedian Nathan Fielder was hoping would happen when he staged the whole thing in the first place. But pigs can actually swim, by the way, and if you missed the viral coverage several years ago of Exuma a.k.a. Pig Beach, an island in the Bahamas inhabited by swimming pigs, you can easily catch up on YouTube and Instagram. I’d especially recommend the videos, because every once in a while, a tourist who leans in to hug or kiss an adorable pig learns that it can bite.

Medieval humans did not think pigs were cute (or at least, nobody went on record as saying so), but they did appreciate their intelligence, and their meat, and the thrill of hunting the wild ones. Pork was more of an elitist meat than a populist one back then, and it gradually became a more self-consciously Christian one, too, more than it had been in the religion’s first millennium. Physicians even saw pigs as anatomically proximate to humans: no species in the animal kingdom came closer. So early medieval feelings toward the animal were in some ways different than ours, but they were just as mixed. In the words of historian Michel Pastoureau, the pig has long been un cousin mal aimé, a cousin we have badly loved.

But that doesn’t mean the relationship doesn’t change. Environments change, economies and appetites change, and so do pigs themselves. Pigs are clickbait because they seem to have new things to show us, and in the process we might also see other things differently. The world always changing in the early Middle Ages, too, and humans learned things from their pigs that sometimes changed their minds about it (which is the subject of the book I’m writing now). I wouldn’t say that our thinking about pigs is evolving, insofar as that implies improvement — if I had to choose, I’d rather be a medieval pig than a modern one — but as long as we’re actually curious about the things we badly love, we are maybe more entitled to our complexity.