Being a Minority in Times of Catastrophe served as the BASEES Study Group for Minority History’s inaugural event. Although our original intention had been to host it in hybrid format, with those outside the UK taking part via videoconference link, the ongoing uncertainties surrounding the public health restrictions led to us deciding to divide the event into two parts. The first involved a two-day remote symposium comprising a keynote and five research panels, which took place on 25-26/06/2021. The second, was an authors’ workshop for participants who had expressed interest in having their paper feature as part of a post-symposium publication. This subsequently took place at the Wiener Holocaust Library in central London on 22/10/2021. 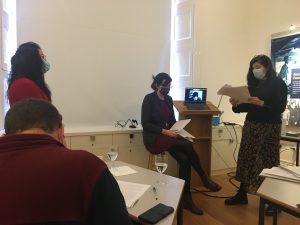 Photograph of participants in the Author’s Session at the Weiner Holocaust Library on 22/10/21, Picture taken by Pierre Van Cutsem, all rights reserved 2021

Given the symposium’s theme, it now feels somewhat fitting that the process of setting up and registering the Study Group mostly took place during the height of the COVID-19 pandemic in May 2020. Indeed, our decision to explore the consequences of historical crisis and natural disasters, stemmed in part from the tragic implications that have unfolded over the last two years. Surveys by the British Medical Association and similar organisations in other countries reported that persons from Black and minority ethnic backgrounds have suffered disproportionately, both in health and economic terms. Although it is still too early to draw conclusions regarding long-term consequence, we wished to explore historical parallels in which minority groups were similarly affected by sudden or prolonged periods of crisis and uncertainty. Among the symposium’s main themes, we were especially eager to explore the impact such developments had on intercommunal relations, how minority communities organised themselves in response and the long-term consequences regarding relationships between the state and its citizens.

These issues quickly emerged as the central focus of the online symposium. The event began with a keynote talk by Dr Mark Levene, Emeritus Fellow in History at the University of Southampton, discussing the feared consequences of climate change for minorities and other historically vulnerable groups across Central, Eastern and Southeastern Europe. The remainder of the first day was then given over to panels exploring the impact of public health emergencies and famine and natural disasters. Continuing with these themes, day two featured panels discussing how minority communities attempted to mitigate the impacts of various crises, the role of the state in seeking to impose ‘modernity’ and the propensity for more openly visible minorities to find themselves as the targets of cultural ‘Othering’ during and after periods of violent upheaval.

Despite the restrictive online format, the symposium proved extremely successful in facilitating lively and intelligent debate. Equally heartening was the greater representation of participants based at institutions outside of the UK, further demonstrating the continued importance of international scholarly collaboration.