This year marks the 50th anniversary of the publication of Sir Keith Thomas’s Religion and the Decline of Magic. In recognition of this momentous milestone, the Past & Present Society generously supported “50 Years of Keith Thomas’s Religion and the Decline of Magic,” an event jointly organized by Michelle Pfeffer, Jan Machielsen, and Robin Briggs. The event was held in the Old Library of All Souls College, University of Oxford, and was also livestreamed via Microsoft Teams. Attendees were able to live react to the celebrations using the Twitter hashtag #SirKeithFest.

Originally published in 1971, Religion and the Decline of Magic offers an incredibly vast and detailed overview of the sixteenth- and seventeenth-century English supernatural. While some early reviewers critiqued the book for making use of “out of date” anthropological approaches, Thomas’s book has since been heralded as a landmark of socio-historical research and has become a classic point of reference for scholars and students of early modern religion and culture.

The event was a resounding success, with more than 300 people joining in both virtually and in-person to celebrate the rich legacy of Religion and the Decline of Magic. It was divided into three panels of interdisciplinary speakers: first, “The Decline of Magic Today” (Sir Noel Malcolm, Robin Briggs, Chris Gosden, Michelle Pfeffer, Will Pooley, Laura Sangha, and David Zeitlyn).

Followed by “The Legacy of Religion and the Decline of Magic” (Paul Slack, Michael Hunter, Alan Macfarlane, Jan Machielsen, Sophie Page, Alexandra Walsham) a recording of which can be watched below:

And finally, a response from Sir Keith Thomas himself, which can be viewed below:

The various panelists reflected on where the field stands today, with some speakers pointing out that we may need magic now more than ever. As Chris Gosden put it, we are “in a mess,” and we need new ways to deal with that mess. Further to this, they critically contemplated the conceptual tools that scholars of the subject rely on – should we talk about “beliefs” in witchcraft? Is “magic” the right word, or should we rather think in terms of what is and is not “enchanted”? These reflections were punctuated by the sound of church bells ringing, which was strangely fitting and added an extra layer of magic to the event.

Members of the first panel were tasked with giving short 5-minute presentations about their current research projects. They discussed how much historical research had changed since 1971, yet how Religion and the Decline of Magic had remained relevant and had influenced, and often inspired, their own research. Laura Sangha in particular focused on how, with the advent of computation, access to sources as well as data processing have been made easier. Referring back to the gargantuan feat of historical research that is Religion and the Decline of Magic, she suggested it might be a good idea to “start counting things again”.

Religion and the Decline of Magic connects generations, this much is clear. Both panels were multigenerational yet had the same deep appreciation of Sir Keith Thomas’s work. Alexandra Walsham purchased her copy of Thomas’s book in 1987, her first academic book purchase; Sophie Page brought her own copy of the book to the conference “as a talisman,” which was still full of her PhD annotations; I personally first came across Religion and the Decline in 2017, as I was writing my master’s dissertation. Fifty years after its first publication, Religion and the Decline of Magic still resonates with a great many people. The online discussion surrounding this celebration further cemented this notion.

The event concluded with a response from the author, Sir Keith Thomas himself – and what better way to end such a magical event? Thomas was witty and gracious and has retained a keen sense of humor. He and his former student, historian and anthropologist Alan Macfarlane, reminisced about the incredible journey of Religion and the Decline of Magic, how it looked at popular religion as an actual subject, and how it transformed the field of social history. 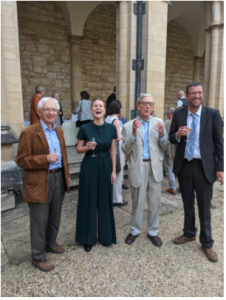