Empires have often been conceived of as primarily spatial configurations due to their obvious geographical extent. These three talks, however, questioned the assumption of imperial spaces’ unity. Their overall argument might be subsumed under James McDougall’s observation that “unity in diversity” is not necessarily the most defining feature of empire. His talk on deportation and migration in the French colonial empire demonstrated that in the French case, empire did not simply mean the unification of a huge landmass, although imperial propaganda routinely highlighted this image. To understand the French empire’s spatial structure, McDougall instead focused on citizens’ and subjects’ actual movements, concluding that such mobilities constituted an imperial space which differed significantly from geographical mappings of empire. The patterns of movement and circulation – both voluntary and coerced – of imperial subjects suggested a maritime rather than a land empire. Moreover, the space of empire itself was produced less by the extent of an idealised sovereignty, which was often more theoretical than effective, than by these patterns of movement and of embodied experience. Not only the overall characterization of the French Empire, but also the location of its ostensible “centres” and “peripheries”, and the relations between them, needs to be reconsidered accordingly.

Manjeet Baruah’s talk developed the debate on imperial spatiality by reversing the perspective. Rather than focusing on spaces constructed through movements and communications, he examined how a particular imperial territory, namely, the frontier space of Assam in colonial India, shaped human interactions. Baruah’s analysis of the colonial encounter between a British tea plantation manager and his servant revealed that the very same section of imperial space was perceived, accessed, and transformed differently by the protagonists. In turn, their distinct appropriations of space in the specific context of the frontier shaped the relationship between the two actors. While exploring the question of what produced such a social-spatial context, Baruah highlighted that the Assam-Burma “frontier” developed during the imperial period as a specific form of historical geography, marked by the relations engendered by state and capital which encompassed and intermediated the social worlds of the region. In the process, while such intermediated relations allowed the imperial penetration and the making of a resource frontier, it also allowed the multiple social actors, both imperial and native, to negotiate with or appropriate the frontier and produce meanings, depending on their location. Everyday relations were also part of this overall dynamic and manifested in the interactions between the tea planter and his servant.

The meaning of imperial space for individual imperial subjects at certain localities seems to be as heterogeneous as the places and subjects themselves. The structural diversity of empires has been acknowledged by most scholars. However, to assume that empire implied unification, driven by the imperial centre and aiming at the successive integration of ever more remote parts, does not seem to correspond to the practised and lived realities on the ground. Therefore, an understanding of empires’ structures requires an analysis of the ways imperial citizens and subjects endured, perceived, and shaped space in their interactions, reflections, and movements. 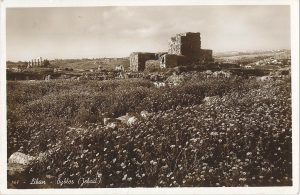 “Postcard showing the excavation site of Jbeil (Byblos), Lebanon. It was sent to Paris by a French tourist in 1938.”, postcard from the personal collection of Jasmin Daam

Jasmin Daam’s talk highlighted this important aspect in terms of the movement of travellers and circulation of postcards in the French and British Middle East Mandates in the early 20th century. The cultures of travel and postcards were located in the dynamic inter-connection between European travellers and local societies. But, through the encounters with changing ideas and practices of representations in and of the region over time, cultures of representing travel through postcards also underwent changes. Daam’s talk highlighted how, when imperial spaces and their social worlds are seen from such dynamic contexts, the forms or structures through which empires affected and entered into the imaginations and lives of people become evident. In this regard, Daam also pointed out how the cultures of travel and postcards allow one to study the individuals themselves as the concrete illustrations of the wider socio-political experiences of imperial spaces. For example, this is exemplified through a careful reading of the image-text relation that comprised any given postcard. While the relation between images and texts could produce representations of the colonial “other” in terms of their social, cultural or everyday worlds, these relations could also be subverted precisely through the disruptions produced between the image and text. Such disruptions were inscribed into the image-text relation by the travellers based on their personal encounters with the social or everyday worlds of the region. There were also occasions when the image itself, produced by local photographers and postcard editors, sought to subvert the colonial discourse. In the process, an important point that Daam’s talk underlined was that though empires were connected to processes of state and capital that produced imperial “orders”, their social and cultural contours were nevertheless diversely experienced and articulated, which in turn led to the production of multiple meanings of imperial spaces.