Propagandists of the American Revolution insisted from the start that events unfolding on the eastern edge of North America had global significance. Twenty-first century historiography has found plenty of ways to repeat the claim. Historians have traced the revolution’s political impact around the world, through its example to other revolutionaries, its effect on how the British empire was governed, the migrations of ideas and people that it triggered, and the ongoing conflicts it brought about or shaped.1 Global perspectives also shape new studies of colonial society that seek to reconstruct, in patchwork, a “vast early America” that stretches well beyond the thirteen rebel colonies. Plenty of good work still falls comfortably within a framework of national teleology centred on the United States. But that frame is no longer hegemonic. Conversations about the American Revolution are now almost as likely to be held together by continental, oceanic, or global points of reference. The revolution is well on the way to being globalized.2

If the American Revolution has been highly amenable to global approaches, though, it has been largely absent so far from the “new history of capitalism.” Historians of “slavery’s capitalism” have effectively overturned an earlier consensus that identified capitalism more or less exclusively with wage labour and proletarianization, and while they’ve done so primarily in a nineteenth-century context, that move creates opportunities to rethink the revolutionary period too. The American “transition debate” that took place in the last three decades of the twentieth century began from a rejection of the idea that “capitalism arrived in the first ships.”3 By contrast, the historiography refracted in the New York Times’ 1619 Project begins with an entanglement between capitalism and racial oppression, both seen as global processes that came to particular fruitions in the history of the United States. In more than one way, revolution had its roots in soil tilled by the enslaved.4 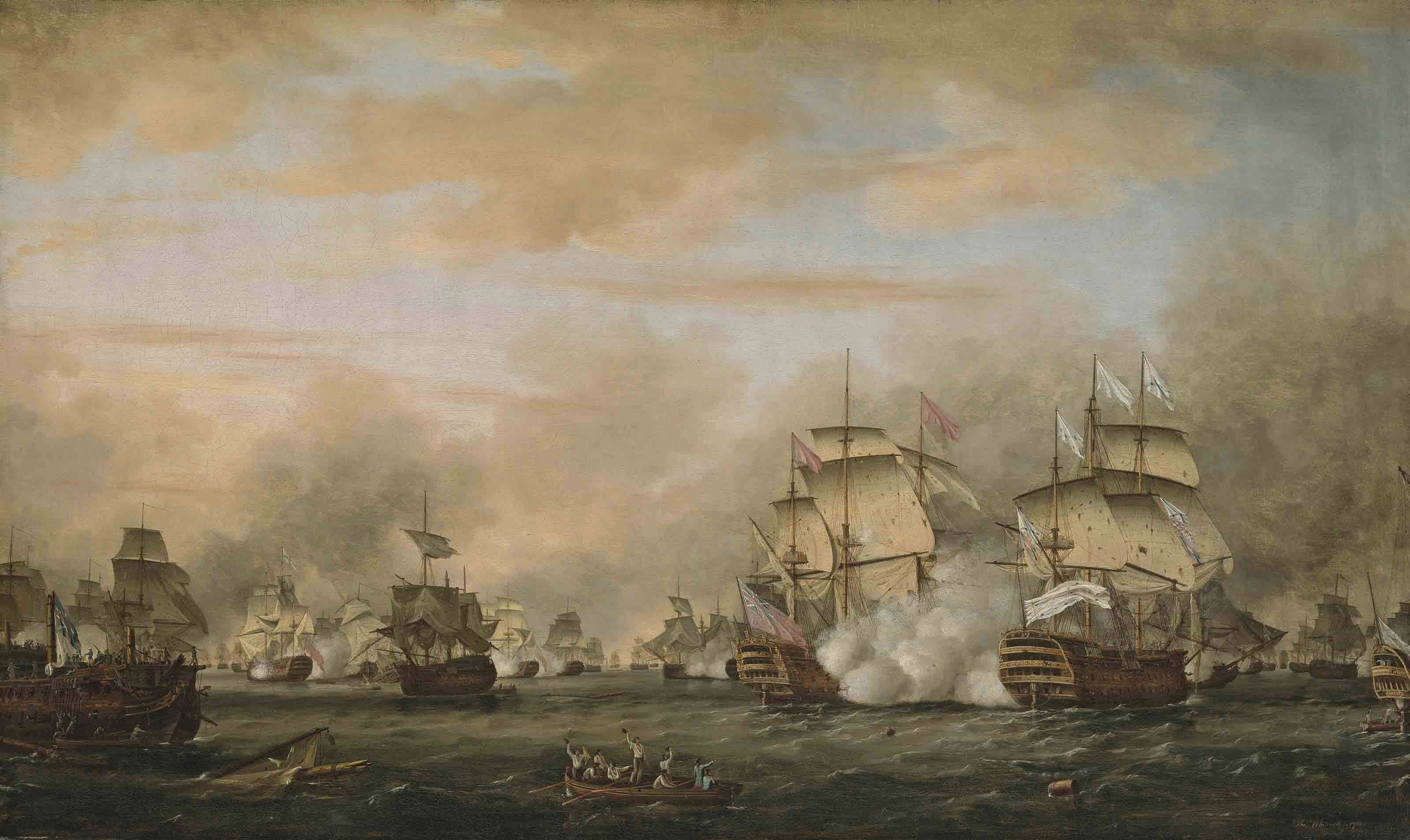 “The Battle of the Saints 12th April 1782”, by Thomas Whitcombe, Public domain, via Wikimedia Commons

Rather than its global repercussions, it is the search for global causes of the American Revolution that has tended to draw scholars towards analysing systems of production, trade, and finance—a global political economy that was held together by the struggles of rival European empires reaching back into the sixteenth century.5 Even when they don’t do so explicitly, such accounts conjure a world-system familiar from the work of Immanuel Wallerstein, animated by the dynamics of core and periphery. That world is characterised by the necessary unevenness of capitalist development—not the annihilation of space, but the creation and violent policing of spatial and racial difference.6 Revolutionaries in the thirteen colonies redrew the map of empire in no small part by reasserting the pre-eminence of whiteness, a strategy that had global repercussions of its own, and helped to reproduce new core-periphery relationships.7

Colonial and revolutionary American society does not look very capitalist when judged by the standard of nineteenth-century Manchester or London. The capital accumulated in the port-cities that led the revolution and dominated the new republic was not industrial but merchant capital. Yet as Jairus Banaji has recently argued, merchant capital was capable of structuring labour and life long before the rise of waged work.8 Understanding the American Revolution in its global and capitalist context is part of the much larger project of tracing capital’s long, incomplete, uneven transformations. The American and other eighteenth-century revolutions were struggles for control within a global apparatus of extraction and accumulation—struggles in which indigenous and enslaved people played important, sometimes determining roles.9 Empire is one lens through which to tell that story, capital another. We have still only begun to understand the articulation between the two.10

This piece is part of a series on Political Economy and Culture in Global History, derived from a collective discussion project of the same name, supported by the Past & Present Society (among others). You can read an introduction to the series here.These pieces accompany a virtual special issue of the journal Past & Present, which will be published in October 2020.

1See, among many others, David Armitage, The Declaration of Independence: A Global History (Harvard 2007); Maya Jasanoff, Liberty’s Exiles: American Loyalists in a Revolutionary World (Vintage, 2011); Jonathan Israel, The Expanding Blaze: How the American Revolution Ignited the World, 1775-1848 (Princeton, 2017); Matthew Lockwood, To Begin the World Over Again: How the American Revolution Devastated the Globe (Yale, 2019).

2For a critique of globalizing trends in early American history, see Johann Neem, “From Polity to Exchange: The Fate of Democracy in the Changing Fields of Early American History,” Modern Intellectual History 17.3 (September 2020), pp.867-888.

3On “slavery’s capitalism” and the “transition debate” see the introduction to the virtual special issue.

4Nikole Hannah-Jones, ed., The 1619 Project, The New York Times, August 2019; Gerald Horne, The Counter-Revolution of 1776: Slave Resistance and the Origins of the United States of America (New York University Press, 2014).

6In addition to the various expositions of Wallerstein’s schema, on uneven and combined development in the global history of capitalism see Alexander Anievas and Kerem Nişancıoğlu, How the West Came to Rule: The Geopolitical Origins of Capitalism (Pluto Press, 2015).

7Robert Parkinson, The Common Cause: Creating Race and Nation in the American Revolution (University of North Carolina Press, 2016); James Belich, Replenishing the Earth: The Settler Revolution and the Rise of the Angloworld, 1783-1939 (Oxford University Press, 2011).

10In my view the most ambitious recent attempt to do so, going far beyond the genre of commodity history, is Sven Beckert, Empire of Cotton: A Global History (Vintage, 2015).