“Gender, Ungodly Parents and a Witch Family in Seventeenth-Century Germany”, my article in the August 2016 issue of Past & Present, centres on a case of witchcraft from the Germany city of Rothenburg ob der Tauber. The case began when an 11-year-old epileptic boy called Hans Adam Knöspel claimed that his mother, Anna Maria, had taken him to a witches’ dance. Hans Adam’s allegations triggered a witch-trial in 1689, which ended with the boy being separated from his family and sent to live in the city hospital, his mother being banished, and his father (cartwright Georg Adam Knöspel) having to give up his citizenship and leave the city with the rest of the family. In the hospital Hans Adam was subjected to an intense pastoral effort by the city’s clerics to save his soul and to teach him to be a good Christian; this involved the boy in a formal ceremony of renouncing the devil in the city’s main church of St James in 1690.

The article was fascinating and challenging for me to write, not least because of the voluminous documentation relating to the case. The post-1500 legal records held in the Rothenburg town archive are exceptional in their quantity and quality; the amount of ink and paper expended on witch-trials increased from 1587 onwards as the city councillors (who were collectively responsible for trying people accused of witchcraft) asked for more expert advice on them, from lawyers, clerics and physicians. By the second half of the 17th century, the councillors had become less certain of how best to proceed in witch-trials and also more worried about the devil’s power to afflict and influence people, with the result that such trials (and the documentation pertaining to them) became ever longer. The Knöspel family case runs to over 250 pages of legal records; the pastoral effort to save Hans Adam’s soul was also regularly discussed at meetings of the city’s Consistorium, or church council, the minutes of which also survive. Working out, and then distilling down, the basic narrative of events in the face of such extensive material is always very time-consuming, even before one moves on to any analysis!

Another key building block of the article was to reconstruct the web of familial relationships within which Hans Adam was situated. In order to keep track of the Knöspels, their antecedents, offspring and marriages, I sketched a crude family tree for my own use while doing the research; the Past & Present copy-editor very sensibly suggested including a much clearer version in the article, so that readers could see who was related to whom. Again, it is the richness of the Rothenburg records (in this context, various municipal records such as church registers, tax-lists, records of citizenship, guild records etc.) which enabled me not only to create the family tree but also to identify some of the key milestones in the life-histories of family members. This sort of prosopographical approach may seem old-fashioned at first glance but without this wider context we would have a poorer understanding of the events of 1689. For instance, Hans Adam Knöspel’s witch story was only taken so seriously by his neighbours and then the authorities because his mother already had a reputation as a harmful witch in her neighbourhood (gained from her own mother) and because his father’s mother and step-father had been banished from Rothenburg for witchcraft in 1663.

The other ‘family’ central to the article is the stereotype of the witch family, in which parents were imagined to dedicate their children to the devil rather than God. Historians of witchcraft have tended to think about alleged witches as individuals; most statistical analysis of trials, for instance, counts individual ‘victims’, often categorising them in relation to gender and (sometimes) age, marital status, and/or socio-economic status. Such analysis is invaluable, but it can blind us to the real or imagined relationships that existed between alleged witches in early modern Europe. I suggest that the idea of the witch family emerged in early modern Europe between 1580 and 1630 in the dynamic interplay between trial episodes, demonological writing, and print culture. It had particular traction because it coalesced easily with a popular belief of longer standing in witchcraft as a learned art passed on from one generation to the next, often in the context of the family (understood as both a household unit and a lineage). In Rothenburg in 1689 the witch-family stereotype helped exacerbate anxieties about ungodly parents in general and the bad parenting of Hans Adam by Georg Adam and Anna Maria Knöspel in particular, with the result that the authorities felt they could only resolve the case by taking Hans Adam away from his parents to be re-educated by the urban clerics in the city hospital. The anxieties expressed by the Rothenburg authorities in 1689 around bad parenting and the solution they adopted – of intervening in the family and taking the child away – seem to me to have important contemporary resonances. Our own society still grapples with the questions of when, and how much, state intervention in family life is justified, on what basis parents can be deemed to be ‘failing’ their children, who has the power to make such life-changing decisions, and which families are at greatest risk of being affected by them. I think it likely that the child-witch phenomenon, which was particularly dominant in 17th-century Europe, constitutes a hitherto overlooked milestone in the longer-term development of the practice of official intervention in apparently ‘failing’ families.

While no-one was executed, the events of 1689 were nonetheless catastrophic for the Knöspels. The family was broken up and expelled from the city; Hans Adam was incarcerated in the city hospital from 1689 until his death in 1698, and seems never to have seen his parents again. The councillors and clerics doubtlessly believed they were doing their best for the boy by ‘redeeming’ his soul through a programme of Christian education, but his harrowing experience is not hard to imagine as he suffered first arrest and judicial interrogation, and then repeated theological examinations, while experiencing beatings, the loss of his family, increasing social ostracism, and severe epileptic fits. I would like to have said more about Hans Adam’s epilepsy and what the case tells us about attitudes towards, and coping strategies for, the ‘falling sickness’ in the later 17th century. The trial records make clear that the authorities entertained three possible explanations for his fits (natural illness, demonic affliction, or play-acting on his part); the fact that the Rothenburg physicians ultimately concluded that he had suffered from epilepsy from birth but that his fits had worsened after his parents offered him to the devil showed that they regarded ‘rational’ medical and supernatural explanations for the boy’s illness as by no means mutually exclusive. 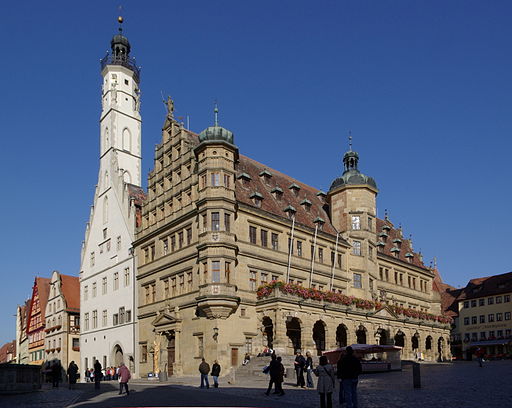 A 21st Century photograph of Rothenburg’s Town Hall, built in the 16th Century. By Berthold Werner (Own work) [Public domain], via Wikimedia Commons