by Josh Allen (Past & Present)

On the evening of the 30th May-which was then the warmest day of the year-over fifty people, split roughly evenly between academics, students and interested members of the general public; gathered at the University of Birmingham to hear Prof. Lynda Nead (Birkbeck) present her research on “The Grain of History: Photography and Post-War Time c.1945-55”.

The lecture represented the high point of a Past & Present funded workshop on the uses of photographs in history organised by Prof. Elizabeth Edwards (DeMontfort) and Dr. Lucie Ryzova (Birmingham) which ran between the 30th and 31st May 2018 at the University of Birmingham. It is envisaged that the proceedings will be published in future as a supplement of Past & Present offering a bold intervention in the field.

After an introduction from the University of Birmingham’s Professor Leslie Brubaker, “in the best tradition of art history lectures… the lights [were then] switched off” and Nead’s keynote lecture commenced. Nead began by contending that through “taking a small number of Picture Post photo-stories on post-war reconstruction as a case study [it is possible to] discuss how time is registered in the taking and printing of photographs in this period”.

In doing this, throughout the forty five minute lecture; Nead neatly wove together several different thematic considerations for historians to consider when approaching photographs as historical sources showing how they interlink. These-chiefly-were the material processes through which the photographs were commissioned, taken, presented, printed and circulated, the ideological and political landscape within which they were created, consumed and which allowed a publication such as Picture Post to resonate and flourish, and- of course-and perhaps most evocatively, the aesthetic quality of the photographs and magazines in of themselves.

Birmingham New Street following bombing in 1941. Image via WikiCommons, and is in the public domain

Nead took the example of the changing connotations of bomb sites and ruined buildings as examples. Initially during and immediately after the war they were aestheticised, both in the pages of picture post and in the wider discourse. They were sometimes viewed as akin to war memorials, or more prosaically as akin to dramatic natural formations such as icebergs, or else as sentinels heralding a new brighter post-war age. The pages of the magazine contained debate over how best to preserve the greatest and most poignant examples of these ruins once the post-war reconstruction began apace.

By contrast, come the 1950s when the pace of post-war rebuilding failed to match expectations and plenty of examples of bombed at areas remained; so the general discourse as channelled through and represented in Picture Post, turned. Now, as post-war society’s concern turned to a perceived breakdown in law and order they were seen as unsafe. Unsafe not just physically-for the hordes of baby boomer children clambering over them-but for adults as well, as they formed potential lairs for muggers, rapists and murders, as well as being sites of gang violence, and places where spivs and prostitutes sold their wares.

In this way she illustrated how Picture Post’s illustrated stories simultaneously created and refracted how post war society thought about itself. The material and social processes related to the creation and consumption of the photographs and the magazine were also key to this. The black and white photographic and reproductive technology of the day enabled the cheap mass reproduction of colourless-yet highly textured images with a crisp, distinctive patina. These were in turn presented in a publication with clean bold graphics and relatively few words letting the pictures “do the work” of conveying the magazine’s editorial line. Which in spite of a Conservative Party supporting proprietor, was consistently progressive and broadly welcoming of the Attlee government’s post-1945 reforms throughout the period. 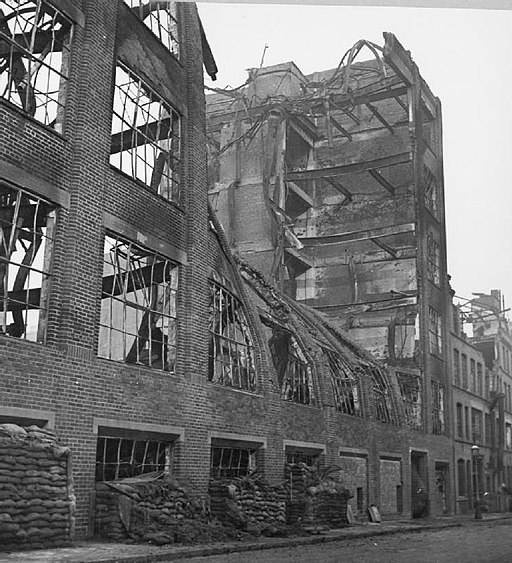 As long ago as 1971, Stuart Hall contended in his Cambridge Review article “Media and Message: a Review of Picture Post 1938-1950” that the Picture Post style was essential to understanding a historical moment and set of social conditions by then long past. He suggested that Picture Post had played a crucial ideological role in paving the way for British social democracy in the late 1940s.

Yet as Nead-moving beyond Hall’s standpoint-shows; through bringing together all of the different concerns that can be brought to bear upon our reading of the photographs their aesthetic qualities render them ambiguous. Whilst the qualities of the magazine itself-its style at once: simple and bold, easily accessible, and respectful of its reader’s intellect, modernist, yet highly driven by narrative, was perfect for “the new Jerusalem”-the qualities of the photographs themselves are deeply ambiguous.

When approaching the magazine’s depiction of bombed out Britain and the wider discourse that they were a part of this enabled Picture Post’s trademark photographic style possessing depth, shimmer and deep contrasts between light and shade, to be the harbinger of progress in 1945 and chime the bell for moral panic a decade later. In this way-Nead charges-the light and dark contrasts of Picture Post’s changing photographs of bomb damage in Britain between 1945 and 1955 vividly depict a change in the public mood from optimism and desire for change in the immediate aftermath of the Second World War, to an all together darker cast of mind mid way through the 1950s.