How can we integrate analyses of ‘cultural’ phenomena within a broader set of political and economic relations? Peter Hill and I returned to this question time and again during our long conversations prior to the creation of the Political Economy and Culture group. Based on our different research materials and methods, we both came up with different answers.

Working on nineteenth-century Arabic literature, Peter tried to connect texts with the political and economic circumstances of their writers: to what extent did form and content relate to the transformations of capitalism? What difference did it make to integrate an analysis of capitalist production into textual interpretation?

Working with living cultural producers in the contemporary Egyptian film industry, on my part, I had a different way to connect the visible labour of filmmaking with hierarchies of creative decision-making, cash flows, and interactions with state agents. One can construct a model of the industry’s political economy out of these embodied relationships in a way that is unreachable through texts.

In August 2018, I went to Cairo intent on beginning a new project about bureaucratic authority in Egypt. I wanted to understand why the state’s bureaucracy managed to survive and maintain a certain legitimacy after the waves of political unrest following the 2011 Egyptian revolution. I chose the Ministry of Culture as my field site not only for practical reasons – I was able to access its offices with relative ease and safety – but also intellectual ones – as the Ministry is integral to the regime’s effort to legitimize its existence.

While I conducted some ethnographic interviews and observations at the Ministry, I became more engrossed with collecting government publications, reports, meeting minutes, and internal correspondence, both in public archives as well as in the personal papers of prominent state administrators. These documents allowed me to modify my project, which was initially restricted to the period after the 2011 revolution, to include a longer-term account of the emergence and development of the Ministry of Culture since 1952.

Cover of “The Culture Caravan”, produced by the Popular University at the Ministry of Culture and National Guidance in Egypt, c. 1962. The project brought live theatre, music, cinema, and a mobile library to rural aereas ‘illuminate the masses’ in the countryside.), image supplied by Chihab El Khachab, all rights reserved

What intrigued me was not just how the Ministry’s administrators had generated legitimating discourses and practices which persist into the present, but also how they defined and redefined ‘culture’ as an object of governance. Why, in other words, is there a Ministry dedicated to the government of culture? And what kind of political and economic infrastructure is needed to run such a Ministry? How can we abstract these relationships from the fragmented textual traces that this infrastructure has left?

When I returned to Oxford from Cairo in October 2019, I regularly attended the Political Economy and Culture meetings. We read Marxist debates surrounding modes of production from the 1960s and 1970s, where Peter and I had initially sought inspiration to tackle the connection between capitalism and cultural production. We also read more recent works engaging with a related range of questions: William Sewell’s Logics of History, Toby Green’s A Fistful of Shells, and Robbie Ethridge’s edited volume, Mapping the Mississippian Shatter Zone. We discussed the detail of the cases’ presentation as well as the ‘big questions’ that they sought to address. We wondered whether the cases could throw a new light on classical historical and theoretical problems.

These discussions encouraged me to formulate broader questions about my research in Egypt. I started wondering, for instance, how I could connect local and national histories to global ones. This is not just a historiographical question – how can one write about connections across assumed geopolitical boundaries – nor a factual one – how can one connect events in one location to events elsewhere. Rather, the question is what analytical status can one assign to local events knowing that similar events occur on multiple scales concurrently – on a local, national, regional, and sometimes global scale? This is crucial in the case of the Egyptian Ministry of Culture, insofar as localized and specialist stories about the Ministry are in many respects neither unique nor independent from the global emergence of national institutions governing culture.

This is not just a matter of concept-history, in the way Andrew Sartori describes the global spread of the idea in his article ‘The Resonance of “Culture”’. Sartori traces how the modern concept of culture emerges around a core debate concerning the ‘fundamental underdetermination of human subjectivity’ among German, French, and English scholars in the eighteenth and nineteenth centuries (677). This debate is eventually re-appropriated by intellectuals outside the European core. Such a diffusionist account cannot capture how resources were mobilized and interpreted locally to create parallel institutions designed to govern culture, whether in national administrations or in international bodies such as UNESCO. Why, and under what circumstances, does ‘culture’ become a matter of government across the globe, especially after World War II? And how are wider transformations of state and capital implicated in this globalization of cultural administration?

A parallel question is how to integrate institutional histories into a global narrative. We did not address much the role of organizations such as corporate firms or civil administrations in our group discussions. This is perhaps because readings centred around ‘the margins of the state’, using Deborah Poole & Veena Das’ expression. Other readings would manifest an unresolved tension in analyses of capitalism. On one hand, some analyses highlight how transnational capital flows and labour struggles bypass corporate/state organizations. On the other hand, some analyses include these organizations only to highlight nationally modulated ‘varieties of capitalism’. This tension rests on the assumption that the state and the firm are ultimately national in scope, even when they aggregate into ‘multinational’ firms and governing bodies. How can one write a global history of national institutions in this context? What difference does it make that these institutions emerge in response to parallel global pressures?

Another broad question that emerged from our readings concerns the importance of a concept of ‘culture’ in historical explanation. As an anthropologist, I have been trained to treat this concept with reservation, if not outright suspicion. Sewell argues against this suspicion in Logics of History, where he seeks to rescue the concept of culture analytically. In line with Clifford Geertz, Sewell defines ‘culture’ as an interpretive dimension which ‘organizes difference’ in social life (172). Extending an argument made by Raymond Williams and Edward Said among others, he argues against ‘authoritarian’ definitions of culture as a homogenous and coherent whole. Such an interpretation is sustained by those who want to establish hierarchies between the ‘cultured’ and the ‘uncultured’, between an ‘authentic’ and an ‘inauthentic’ national culture, between the ‘civilized’ and the ‘uncivilized’. 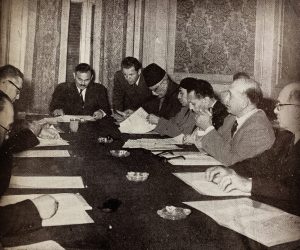 This hierarchical impulse is visible among the intellectuals/bureaucrats who administer the Egyptian Ministry of Culture to this day. No matter their preferred definition of culture, their writings conceive of it as an ultimate moral good; as general knowledge to be imparted to the ignorant masses authoritatively; as an essential component of national identity. So how can one retain, like Sewell, an analytical concept of culture when a competing authoritative understanding remains prevalent in this context?

Anthropologists usually resolve this conundrum by treating the analysis and the ethnographic setting as two separate things. They are quick to establish a break between emic understandings and etic ones; how people think about culture in Egypt as opposed to metropolitan scholars. This attitude reaches an obvious limit in the case of Egyptian intellectuals/bureaucrats, who inhabit a very similar epistemological universe to European intellectuals. All these intellectuals borrow from, and engage with, various traditions of Western humanities and social science, carefully articulating their perspective on ‘culture’ through these borrowings and engagements.

The key difference, in this context, is not just epistemological but political. What distinguishes the concept of culture among Egyptian intellectuals/bureaucrats is not what they know or how they know it, but to what end they apply this knowledge. These intellectuals do not inhabit an emic sphere insulated from an etic one, but they mobilize certain ideas and resources to impose their authority over a portion of the Egyptian population. This imposition is what intellectuals in the lineage of Sewell, Williams, and Said contest. Any attempt to analytically recuperate the concept of culture ought to start from this political difference. The stakes are not just what ‘culture’ means as a concept, but how ‘culture’ is meant (or not) to govern people. In a context of epistemological parity between Western and non-Western intellectuals, it seems spurious to recuperate a concept as though it were possible to purify it from its political and economic application in state administration.

Our reading group discussions cannot be reduced, of course, to what I outlined above in relation to my own project. We talked extensively about the emergence and transformation of capitalism; about the interpretive gaps between dominant and dominated groups engaged in uneven economic exchanges; or even the viability of ‘the global’ as a category. Ultimately, these conversations had one great benefit in my eyes. They demonstrated that the phenomena encompassed under the headings of ‘political economy’ and ‘culture’ can only be fruitfully analysed in conjunction. To an extent, it is precisely their separation which has led generations of Egyptian intellectuals/bureaucrats to dissociate a ‘cultural’ history of the Ministry of Culture from a political and economic one. This dissociation is unhelpful in telling the Ministry’s own story. More importantly, it obscures its situation within a global institutionalization of culture as an object of governance.

This piece is part of a series on Political Economy and Culture in Global History, derived from a collective discussion project of the same name, supported by the Past & Present Society (among others). You can read an introduction to the series here. These pieces accompany a virtual special issue of the journal Past & Present, which will be published in October 2020.