Held on 6 December 2019, “Stonewall 50 years on: gay liberation and lesbian feminism in its European context” at Manchester Metropolitan University, attracted scholars from around the UK, Europe and the US, mixing with a large audience of researchers, students, activists and members of Manchester’s queer community. Online discussion around this event has been collated and can be viewed here.

June 2019 marked the 50th anniversary of the Stonewall Riots in New York City, often credited as the spark that set gay liberation alight, not just in the U.S., but around the Western world. The organisers of this one day conference saw the 50th anniversary as an opportunity to rethink the various gay liberation and lesbian feminist movements that the events at Stonewall supposedly spawned in Europe, asking to what extent they were influenced by their own national events, ideologies and imaginaries, as well as interacting with each other in a network of action and ideas. 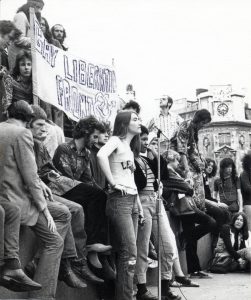 The conference consisted of four panels. The first, on ‘Protest Repertoires,’ considered some of the ways in which LGBT communities have mobilised political protest in the 1970s to the present. Andrew Shield (Leiden University) discussed the initial reaction to the events at the Stonewall Inn from the perspective of Danish and other European activists, while Francesco Romana Ammaturo (University of Roehampton) traced the evolution of the Pride march into a globalised, yet curiously hyper-local phenomenon. In so doing, Ammaturo considered the concept of “metronormativity”; whether queer studies has been too beholden to major urban sites, at the expense of attending to local and regional identities, was a theme which we returned to frequently throughout the day.

The second panel concentrated on the transatlantic exchanges inherent in gay and lesbian activism in the 1970s. Christopher Ewing (Virginia Commonwealth University) explored links between black power in the United States and gay liberation in West Germany; Ann Marie Wilson (Leiden University College) considered the international backlash against Anita Bryant’s anti-gay ‘save our children’ campaign of the late 1970s; and Kevin-Niklas-Breu (University of Bremen) focused on the transnational dimension of anti-AIDS activism, especially links between French and German activists and their experiences of visiting the United States.

After a break for lunch, the conference turned to consider the more personal dimensions of activism around sexuality in a panel titled ‘Emotions, Intimacies, Faith.’ Ralph Day (Birkbeck, University of London) discussed London’s Lesbian and Gay Switchboard, focusing on the intimacies that developed between volunteers and the tens of thousands of people who called the service for advice and support. Richard O’Leary (Queen’s University Belfast) shifted the focus to the gay Christian movement, particularly focusing on the role of both Catholics and Protestants from Ireland and Northern Ireland in building a European network. Maria Bühner (University of Leipzig) then considered how lesbian activists in 1980s East Germany ‘felt backward’, in memorialising female victims of the Ravensbrück Nazi concentration camp.

The final panel, featuring Vojin Saša Vukadinović and Nina Littel (Leiden University) considered another theme that ran through the whole day, the interrelation between text and political action. Vukadinović approached this dynamic through the French philosopher Monique Wittig, whose life and work were defined by the interplay of writing and politics, while Littel focused on the textual production of Dutch lesbian activist groups, showing that German, Italian and other European influences (rather than American) were paramount in the Netherlands.

The closing roundtable featured Lucy Robinson (University of Sussex), Matt Cook (Birkbeck, University of London), Dan Callwood, and Rebecca Jennings (University College London), and was chaired by Craig Griffiths (Manchester Metropolitan University). Reflecting upon the day as a whole, the panelists and audience shared their thoughts on the importance of balancing a history that has a strong global element with a sense of place and locality; the salience of our own subjectivities as historians when approaching questions of gender and sexuality; and the necessary challenges of working towards histories that recognise and embrace diverse racial, gender and sexual identities. The panel and the audience were particularly interested in constructing entangled histories, the creation of history as a political act, and the difficulty of satisfying this political imperative within the constraints of academic research frameworks, institutions and funding requirements.

The conference was a great success, providing both a rare opportunity to rethink the frame in which we approach the histories of gay liberation and lesbian feminism from a European focus, and a chance for academics and students at all career stages to share ideas with activists and members of the queer community. While the papers were rich and thought-provoking, the breaks in between were equally important in enabling all those present to themselves create new transnational networks around histories of gender and sexuality and political activism.