by Emily Webb (University of Leeds)

This one-day conference (University of Leeds, 18th September 2019) focused on how commodities circulated within and between Empire(s), with the aim of exploring how these movements affected the Empire and its parts. Using a broad definition of ‘commodities’, this conference brought together scholars of empire and commodity over a broad historical time-period. With a series of panels, a keynote speech by Dr. Jelmer Vos (University of Glasgow) and a roundtable discussion, we explored methodologies and research ideas collectively, to generate new perspectives on commodities in the colonial and post-colonial context.

Conference has begun with a fantastic keynote by Dr Jelmer Vos discussing Angolan coffee and histories of labour and consumptions in Africa! A day of exciting panels ahead! #AcrossColonialLines #Commodities #history pic.twitter.com/beu4GtqK05

The conference was well-attended, with ten speakers from a variety of UK and international institutions, being joined by an additional ten attendees. The day began with a thought-provoking keynote delivered by Dr. Jelmer Vos (University of Glasgow). Titled ‘What Angolans Got for their Coffee: Connecting Histories of Labour and Consumption in Colonial Africa’, the keynote lecture drew together broader themes of the conference before positioning Angola within global coffee production, and exploring the impact of growing demand for Robusta coffee on the Angolans. The keynote was well-received and led to discussions on the challenges of accessing commodity archives and Eurocentrism in commodity history. 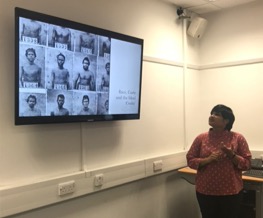 The first panel of the day, titled ‘Commodities and Colonised Spaces’ explored the impact of Empire on commodities and their movement— beginning with a paper on the ideal post-slavery labourer delivered by conference co-organiser Purba Hossain (University of Leeds). The paper argued that the post-slavery nature of Empire and debates around the burgeoning trade created a certain image of the migrants that pervaded indentured discourse and informed migration policy. This was followed by Lowell Woodcock’s (Sussex Centre For World Environmental History) exploration of the emergence of Caribbean tourism as a commodity in and of itself. His paper drew on an anthropological exploration of the ‘paradise motif’ noting how this necessarily drew on, reconfigured and distorted the Caribbean’s colonial heritage.

The second panel shifted focus to the production of commodities in the colonial setting, and the resulting knowledge production. Willam van Schendel’s (University of Amsterdam) paper critiqued debates about ‘colonial knowledge’ by comparing indigo commodity chains that existed in British Bengal, Dutch Java and French Senegal. The paper argued that these chains benefitted from cross-imperial flows of indigo knowledge but that this knowledge was parcelled out locally in distinctly different ways. Jamie Banks (University of Leicester) then discussed indentured migration and the creation of new markets for opium in both British Guiana and Mauritius. Finally, Andrew Blackler (University of Birmingham) explored the movement of commodities within and beyond the late-medieval Venetian Empire calling on historians to broaden their conception of ‘empire’ beyond the European powers of the post-industrial world.

The final panel of the day featured two papers discussing the histories of tea imported to both the US and Britain and one considering the commodification of the Bible in colonial India. Erika Rappaport (University of California) discussed the gendering of spaces in tea shops and exhibitions during the nineteenth century. Her paper challenged binary understandings of producer and consumer and complicated the scholarly debate about how metropolitan women participated in the imperial project highlighting how cultural processes were central to the formation of nineteenth-century capitalism. Emily Webb (co-organiser, University of Leeds) then discussed the illicit importation and consumption of tea in eighteenth century Britain. Arguing that the consumption of such illicit tea could be viewed as a subtle form of resistance to the increasing infringement of London elites in provincial affairs. The final paper of the day was delivered by Sam Kocheri (University of Birmingham) who looked closely into the transmission of Bible into India and addressed the influence exerted by the Bible as a commodity and means of knowledge dissemination in both Britain and India.

These panels addressed many questions key to understanding the relationship between commodities and Empires, and the socio-cultural impact of the movement of commodities across colonial lines. Some of these questions were further discussed during the roundtable ‘Commodity Histories: Methodologies and Challenges’. The roundtable featured the keynote Dr Jelmer Vos, Prof. Erika Rappaport (University of California, Santa Barbara) and Dr Jonathan Saha (University of Leeds)—all of whom have recently been involved in researching and writing commodity histories. Discussion began with merits and challenges facing researchers who explore commodity histories. Delegates noted that using the lens of commodities on historical studies provides a useful and interdisciplinary approach to look beyond temporal and spatial boundaries currently present in global narratives. At the same time, however, this asks for multi-locational research across different countries and languages posing practical and financial difficulties. This opened conversations around borders, changing cultures and the importance of the colonial state in deciding the production, marketisation and consumption of commodities. 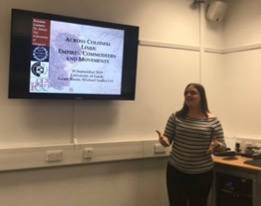 Overall, the conference was a great success, and we have received several very positive comments on the conference, especially on the diversity of papers, the good mix of people from different stages of academic career, and the involved discussion throughout the day.

We would like to thank the Past and Present Society and Royal Historical Society for their generous and kind support with the event.

Past & Present logo, 2017 all rights reserved