The conference, ‘Orosius Through the Ages’, was a long time coming. Although the vision for a unique event to bring together scholars on Paulus Orosius and his Historiae adversus paganos developed in 2015, months of planning saw the event sadly postponed because of the pandemic. After an extended absence of in-person events, it was wonderful to meet again with colleagues physically at Senate House in London, albeit following measures to try to keep us all safe. We were so pleased to make the event more inclusive and diverse by hosting the conference online for speakers and delegates not in the room, enabling knowledge exchange about Orosius and the reception of his Historiae between participants in countries far beyond the UK. 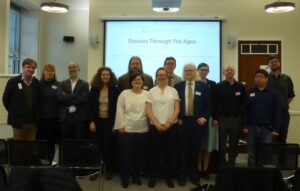 The conference featured 22 speakers over three days, including keynote presentations from Elizabeth M. Tyler, Professor of Medieval History at the University of York, and Peter Van Nuffelen, Professor for the Cultural History of the Ancient World at Ghent University. Prof. Van Nuffelen spoke on ‘Orosius the Historian: Historiographical Traditions and Treading the Line’. Prof. Tyler spoke on ‘Orosius, Universal History and the Making of Imperial England: From Alfred the Great to the Conquest’. The conference centred early career academics and postgraduate students, especially through a selection of spotlight talks that gave presenters five minutes to speak and five minutes for discussion. The event was designed to bring together scholars from a range of backgrounds and career-stages, working in contingent fields on different aspects of Orosian studies, from the reception of Roman history in the fifth-century Latin Historiae, to the Arabic translation of the Historiae in Muslim Spain in the tenth century, and onwards into early modern Christianity and the turbulent politics of the Reformation. 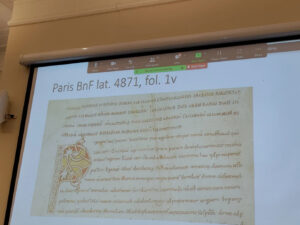 The conference was framed by a Wikipedia editathon supported by MedievalWiki and #WCCWiki, and led by Fran Allfrey in-person and Lucy Moore online. 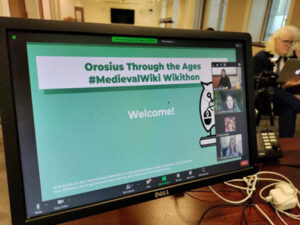 We provided training on how to edit Wikipedia to improve the visibility of those who identify as women and non-binary in Orosian studies online. 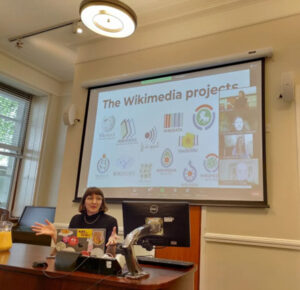 Although often overlooked, those who identify as women and non-binary have made essential contributions to the study of Orosius and the Historiae, such as Elizabeth Elstob who worked on an edition of the Old English Orosius in the early eighteenth century. The editathon produced four new articles, including pages for scholars like Natalia Lozovsky and Eszter Spät. We edited 36 articles in total which have attracted nearly 30,000 page views, including the page for our keynote speaker, Elizabeth M. Tyler. 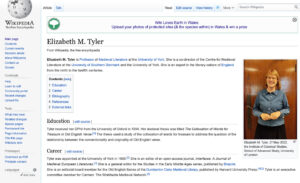 Elizabeth M. Tyler’s Wikipedia page, which was improved during the Editathon (image supplied by Victoria Leonard)

The conference was organised by Victoria Leonard (Coventry University and the ICS), Elisa Manzo (University of Naples Federico II), and Cameron Wachowich (University of Toronto). The conference was generously sponsored by the Royal Historical Society, the Classical Association, the Centre for Arts, Memory and Communities at Coventry University, Past & Present, and the Institute of Classical Studies. Thanks to their generosity, we were able to offer bursaries to support the attendance of postgraduates, early career academics, and those who are under employed or not in paid employment. Support was also available for caring costs. We are enormously grateful to the Institute of Classical Studies for hosting the conference especially with the extra demands of a hybrid format, and we thank all of our speakers and delegates for making the conference such a productive, warm and enjoyable event.