by Dr. Genji Yasuhira (University of Utrecht/Japan Society for the Promotion of Science)

In my article ‘Transforming the Urban Space: Catholic Survival Through Spatial Practices in Post-Reformation Utrecht’, which recently appeared in Past & Present No. 255, I discuss how Utrecht’s Catholics sought spaces to live as Catholics under Protestant rule. Following an equally unexpected and exciting encounter with early modern Dutch history, I decided on Utrecht’s Catholics as a case study for my dissertation, moving from Kyoto to Utrecht in 2015. From the time I first set foot in the city, I was impressed by the historical materials still existing there, from written documents and artworks to buildings and streets. In adopting the narrative style of a ‘tour guide’ for my article, I sought to reflect on my experiences walking through Utrecht’s narrow streets while imagining what seventeenth-century life would have been like. Here I would like to take my readers on another virtual urban tour to discover the traces of early modern Catholic survival in Utrecht’s urban space today.

As luck would have it, my article has been published in an important memorial year for the city. On June 2, 2022, Utrecht began celebrations for its 900-year anniversary. For it was on June 2, 1122, that Utrecht obtained its city rights from Emperor Henry V (1081/86–1125). Yet by that time the city already had a long history. Utrecht was first built around the ancient Roman castellum of Traiectum along the northern borders of the Empire. On the site of the abandoned fortress, the missionary saint Willibrord (c. 658–739) then consecrated the Dom Cathedral (P1 on the map on page 47 of my article) to St Martin (c. 316–397), who would later become Utrecht’s patron saint. St Martin’s famous act of mercy, by which he cut his cloak in two to help a beggar, is still commemorated in the red/white scheme of Utrecht’s court of arms colouring the city’s urban space today.

Utrecht’s medieval religious landscape was then drastically changed by the sixteenth-century Protestant Reformation and the Dutch Revolt against the Habsburg monarchy (1568–1648). From 1580 onwards, the public church buildings and hospice chapels were reserved exclusively for the religious cult of Reformed Protestants, while monasteries and convents were secularized. Upon arrival in Utrecht, the sight of the Dom tower (currently in restoration), the city’s highest building, cannot escape your notice. Next to the tower stands the Dom Church, still in Protestant use today, where the iconoclastic fury which struck Utrecht in 1566 remains readily visible (fig. 1; pp. 46, 55 in the article). But as I argue in my article, seventeenth-century Catholics did at times boldly display their religiosity in the public facilities of their city. In St Pieter Church (P2), for instance, you will see the sarcophagus of St Bernulphus (d. 1054), Bishop of Utrecht, which was exhumed in 1656. Through the relics of this saint, Utrecht Catholics were able to give new religious significance to the church (p. 59). The Catholic past can also be felt as you wander through the buildings of former monasteries and convents where Catholic material objects could still be found down into the late seventeenth century. Examples include the Agnieten monastery (fig. 2; M8; p. 55) and the Catharijne convent, which have been incorporated into the Centraal Museum and the Museum Catharijneconvent, respectively. Welcoming you there will be the work of seventeenth-century Catholic artists from Utrecht, such as Abraham Bloemaert (1564–1651) and Gerrit van Honthorst (1592–1656). Even after the Protestant Reformation, Catholics remained extremely active demonstrating their faith in hospices, such as St Job (H5 on the map) and St Anthony (H8; pp. 54, 62–63). While these have vanished from the urban landscape, what does remain visible is the ‘cross’ in the name of the Kruisstraat (Cross street), where the Holy Cross hospice (H3) once stood and attracted Catholics to the cult of the holy cross down into the middle of the seventeenth century (fig. 3; pp. 63–65). 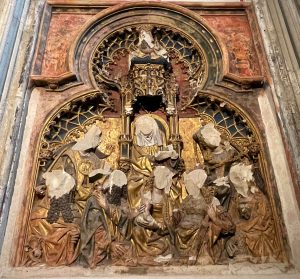 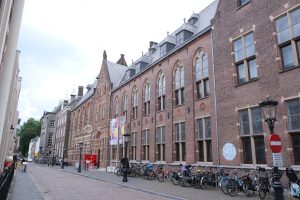 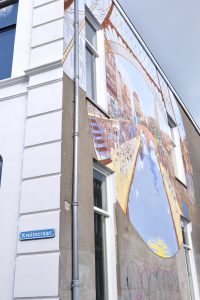 The outlawing of Catholicism in 1580 meant that Catholics were in principle prohibited from exercising their faith anywhere, including their own homes. As my article demonstrates, Utrecht’s Catholics gradually shifted their meeting places from public facilities to their private houses, renovating some of them as ‘clandestine churches’ or ‘house churches’, that is, chapels constructed behind the thresholds of their houses. Like other Dutch cities, Utrecht’s ancient core includes a maze of narrow alleys, which early modern Catholics effectively utilized to escape judicial investigation. Grietgen Janssen lived in a house on one such alley called the Dorstige Hartsteeg (fig. 4), which was raided by judicial officers who accused her of hosting Catholic illegal assemblies and allowing her co-religionists to escape through the heavy door of the house. The area along the Oudegracht canal may be a lively district featuring many restaurants and stores today (fig. 5), but imagine for a moment how Catholics escaped judicial investigators in the house of Marichge Jacobs by fleeing through the wharf cellar—one of the many still lining the walls along the city’s canals (p. 70). The Nieuwegracht district, in contrast, is a quiet residential area, which housed several Catholic clandestine churches in the seventeenth century. Strolling along the Nieuwegracht canal, you may be struck by the distinctive exteriors of ‘Loenersloot House’ (Huis Loenersloot, fig. 6), named after one of its early modern owners, the Lord of Loenersloot. Imagine, then, Catholics escaping through the windows of this imposing residence (p. 74), which the Lady of Loenersloot had opened for her co-religionists to use as the Jesuit clandestine church of St Martinus (C8). 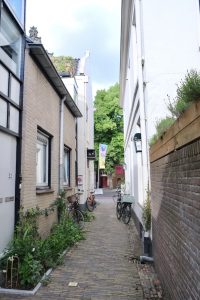 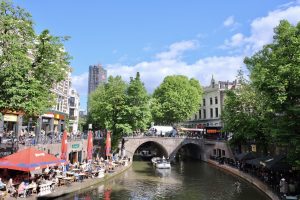 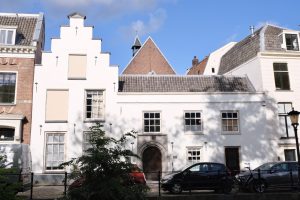 Once your feet are heavy from trudging through the city’s many cobbled alleys, you can quench your thirst in the former secular clandestine church of Maria Minor Achter Clarenburg (C2), which now houses a Belgian bar (fig. 7). Taking in your spectacular surroundings, imagine how this place once welcomed early modern Catholics who assembled there for worship under the threat of raid by the judicial authorities (pp. 75–76). Leaving the bar for Utrecht Central Station, you can opt to walk through the Mariahoek district, a site within the medieval immunity of the chapter of St Marie. In this area, next to the collegiate church of St Marie (P4) and the city walls, Catholics constructed the secular clandestine church of St Gertrudis (C1). In fact, the entire district became a bulwark of outlawed Catholicism, where leading Catholic figures, including nobles, lawyers, priests, and klopjes (spiritual virgins), could be found living together. The nineteenth century saw the demolition of St Marie church, the laying of a railroad, and the partial tearing down of the city walls. Yet the Mariahoek itself still exists, including a part of the cloister of St Marie and an intricate network of alleyways around the clandestine church which seventeenth-century Catholics tactically employed to hinder the judicial officers (pp. 76–79). The interior of the clandestine church itself has been beautifully preserved in the congress centre In de Driehoek (fig. 8; cf. the nineteenth-century painting shown on page 77 of the article) standing next to the Old Catholic Cathedral of St Gertrudis, built in 1914. A visit to the Mariahoek may trigger you to visualize early modern Catholics and their attempts to create and safeguard their sacred spaces so as to resist confessional discrimination. 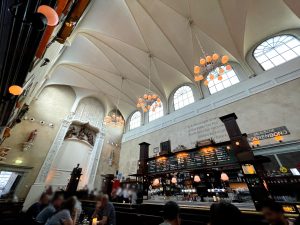 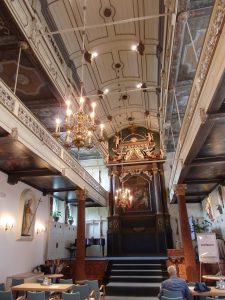 Traces of early modern Catholic survival continue to be present and visible in todays’ Utrecht. From June 2, 2022 until the feast day of the city’s patron St Martin (November 11), which Utrechters have long celebrated even during the early modern Protestant regime, they will hold various festive events to mark their city’s anniversary and celebrate its diversity. Over the 900 years of Utrecht’s existence as a city, numerous different historical layers have accumulated. The memories embodied in the urban space include not only the Reformed Protestant and Catholic past, but also extend to eighteenth-century Lutheran and Anabaptist clandestine churches; an eighteenth-century synagogue, numerous Stolpersteine, and a memorial wall commemorating the names of the 1239 Jewish Utrechters killed during the Nazi occupation; a twentieth-century gay rights memorial dedicated to victims of the eighteenth-century Utrecht sodomy trials; streets and buildings referencing and/or reflecting the city’s colonial past; and a twenty-first-century Islamic mosque. By now, the seventeenth-century multi-confessional city has been transformed into a multi-religious, multi-cultural city in which remnants of early modern Catholic survival still exist. By experiencing the city’s urban space today, and not just secluding ourselves in the archives, we can find an alternative approach to fundamental and universal problems confronting human beings regardless of the specific time or place in which they live or lived—coexistence, the public/private distinction, and minorities’ survival tactics.