It was an eye-opener, and it was puzzling. While exploring the history of the 1949 Geneva Conventions, the most important rules ever formulated for armed conflict, I noticed an astonishing historical phenomenon that defied simple explanation.

For most historians, it is a well-known fact that twentieth-century empires framed their colonial wars as ‘emergencies,’ or as ‘police actions,’ in an attempt to escape international scrutiny. Think of the twentieth-century colonial wars in Algeria, Kenya, and elsewhere. However, as I was going through imperial archival documents from France, the Netherlands, and Switzerland, I was surprised to read that those same empires had invited the International Committee of the Red Cross (ICRC) to intervene in their colonial wars in Southeast Asia after 1945. What can account for this counterintuitive phenomenon?, I wondered. And what might be its historical significance in light of our broader understanding of we answer the question of empire and its relationship with global (legal) politics?

In my Past & Present article, ‘Internationalising Colonial Wars: The Geneva Conventions in the Global South’, I begin my story of rewriting the genealogy of the legal internationalization of colonial war by looking at the global impact of the Indonesian Revolution. Following Japan’s unconditional surrender in August 1945, and the Indonesian Republic’s proclamation of independence that same month, members of the ICRC began to distribute humanitarian aid among Allied nationals and prisoners of war in the region. The brutal Japanese occupation had given rise to a whole new political landscape. Indonesian nationalists had gradually built up a powerful base of support to challenge European imperial rule, while Dutch imperialists were trying to restore the pre-war status quo, which inevitably led to hostilities between the two opposing sides.

What I found most interesting, however, was that the ICRC was asked to intervene in decolonising Indonesia not by the Republicans, as some historians might have expected, but by their former European coloniser. The original request for ICRC intervention in Indonesia came from Dutch authorities; it also received support from the British as well as the Indonesians. Yet it defies the existing literature’s expectations. While some might interpret this request as a puzzling contingency, I felt there was a lot more to it than meets the eye.

For instance, Sukarno, the leader of the newly proclaimed Republic, realized that the wave of brutal violence in the wake of the Indonesian Revolution imperilled US support for his struggle against European colonial rule. By incarcerating tens of thousands of (Indo-)European nationals suspected of pro-colonial allegiance in so-called protection camps, he hoped to bring a rapid end to the violence that was thought to damage the Republic’s prestige in the eyes of international (i.e., American) observers. Thus, when the Dutch government asked the ICRC in October 1945 to inspect these camps, he immediately supported this endeavour for internationalisation of colonial war. 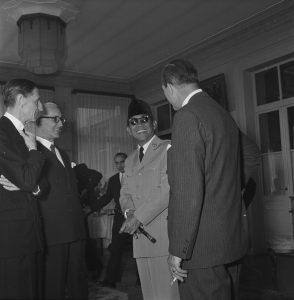 Sukarno visiting the headquarters of the International Committee of the Red Cross in Geneva, 1956. Copyright ICRC Audiovisual Archives, 1945, V-P-HIST-02662-06, Supplied by the author

In my article, I tried to click the different pieces of the puzzle together by analysing why, and how, ICRC delegates sought to challenge accepted ideas of sovereignty and international law in the decolonising Southeast Asia world while providing a new global stage for anti-colonial activists to counter imperial frameworks. From Indonesian Republicans to Vietnamese communists, anti-colonial activists across the political spectrum used the ICRC’s presence, as well as the Geneva Conventions, as a platform to voice their complaints and to strengthen their position internationally.

For these small ICRC interventions in Southeast Asia, the uncharted world of interacting with anti-colonial national liberation movements presented a rich source of legal possibility, I noticed. In internationalising colonial wars through the revision of humanitarian law after the Second World War, ICRC legal specialists took a number of surprisingly radical steps that challenged existing racial hierarchies and imperial claims to absolute sovereignty. In this way, they laid the foundations for the first binding international legal provision for colonial war after 1945. This central provision, incorporated into all four Geneva Conventions of 1949, became known as Common Article 3.

For non-legal observers, this provision might look like a trivial legal curiosity. For international lawyers, however, it represents one of the most important legal innovations of the entire twentieth century with regard to regulating warfare. CA3 facilitated the appearance of anti-colonial actors on the stage of global humanitarianism, among other things. In later years, the ICRC employed this new element of humanitarian law as a weapon against imperial efforts to protect its legitimacy in the eyes of an increasingly diverse global community. 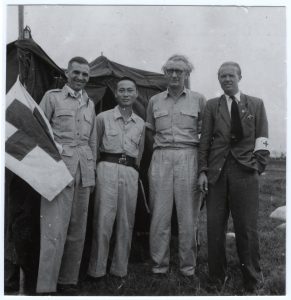 ICRC delegates Pierre Descoeudres (from right to left), Charles Aeschlimann, Ton That Tung of the Vietnamese Red Cross, and Huard of the French Red Cross in a demilitarized zone near Hanoi, March 1947. Copyright ICRC Audiovisual Archives, 1947, V-P-INDO-N-00001-1. Supplied by the author

My article seeks to reveal a clue to the larger puzzle of why anti-colonial activists and imperial powers agreed to, or even demanded, this legal principle – i.e. the idea of internationalizing colonial wars through humanitarian law. It suggests that some of our assumptions about the history of (legal) internationalism needs to be critically reassessed. Most parts of the current historiography still imply that such mechanisms had little impact on decolonisation until the Algerian War of Independence (1954-1962) and the Bandung Conference (1955).

In reality, anti-colonial activists actively engaged with the ICRC and humanitarian law already in the 1940s, if not earlier, and tried to use them to obtain access to new transnational networks of anti-colonial activism. More broadly, I argue in the article that we need a different cast of characters revealing how, and to what extent, international law became a vehicle for national liberation movements that sought to overturn the global colour line. This type of analysis provides both historians and international legal scholars with a range of new opportunities for rethinking about how international law has influenced the course of decolonisation, and vice versa – and what it means to make war more humane.