My Past & Present article ‘Good Reading for the Million’ began with Margaret Mead. While writing a book about her attempts to bring anthropology to bear on international relations in the Second World War and the Cold War, I was curious to find out more about her impact on public opinion through the direct influence of her books. I had had a longstanding interest in the growth of the audience for serious non-fiction books, including academic books; I’d written a column on the subject for a Christmas round-up in The Times newspaper in 1993, a short book of my own on the market for history books, and an essay for History Today in 2009 for which I interviewed the pioneers of popular series like the Fontana Modern Masters, Oxford’s Past Masters and the more recent Very Short Introductions. But I was still taken aback by the scale of Mead’s audience when her books went into paperback – I estimated that she had sold a million paperbacks by 1960. I knew that Mead was an unusual academic who angled her books (from the very beginning, with Coming of Age in Samoa in 1928) at a wide audience interested in issues of child-rearing, adolescence and sexuality. But I realised that Coming of Age didn’t find a really wide audience until it was paperbacked in 1943. And her mentor Ruth Benedict’s Patterns of Culture, published in 1934, while influential enough amongst anthropologists, didn’t make much of an impact on the wider public at all until paperbacked in 1946 – at which point it sold a million copies on its own. I knew that Mead’s friend David Riesman had scored a similar success at the same time with The Lonely Crowd – another work of academic social science to sell a million copies in the postwar years. What was going on?

Front cover of an early edition of “Coming of Age in Samoa”, Pelican Books

I thought (and still think) that the social sciences had something special to offer the postwar audience – a new form of expertise that increasingly substituted for (or combined with) religion to address big questions about our place in the world, our relations with other people, and what the future holds. But the runaway successes of these serious (not always accessible) books in paperback suggested that something else was also afoot: the paperback revolution. Riesman himself, I found, had observed this phenomenon even before his own book benefited from it, in an Antioch Review essay of 1952: he was a good enough sociologist to spot the significance of Patterns of Culture flying off the newsstands and drugstore racks, but he couldn’t yet hazard a guess about what his hundreds of thousands of fellow citizens made of what they read. So far as he knew, he said, no-one had studied the phenomenon.

As I looked at the studies in the mass dissemination of knowledge that have proliferated lately in intellectual history and the history of science – studies of books like the Kinsey Reports, Betty Friedan’s Feminine Mystique, Rachel Carson’s Silent Spring – I could see that the role of the paperback in supercharging that dissemination remained to the present relatively unexplored. I knew one place to start studying it – the Penguin archive at the University of Bristol, where I quickly discovered could be found the publication records for all the many Pelican books that had first revealed the possibility of a mass market for serious non-fiction in the 1930s. But then I had a stroke of luck. It turned out that Penguin had started a U.S. branch during the Second World War. At the end of the war, its boss was Victor Weybright, hardly a household name even to historians, but a man I knew well, as a friend of Mead’s who had during the war been head of the London branch of the Office of War Information and in that capacity had masterminded her speaking tour and pamphleteering in Britain in 1943, seeking to improve the reputation of Americans in British public opinion before the GIs arrived in force before D-Day. Weybright, I could see, was a man much like Penguin’s Allen Lane, a left-winger with a passion for adult education and the diffusion of enlightenment to the modern masses. Of course he would end up as Penguin’s American representative.

Better still, I found, Weybright quickly broke away from Penguin and founded his own publishing house, New American Library, with his own Pelican-style line, Mentor Books. One of his first publications was… Ruth Benedict’s Patterns of Culture. And an NAL archive equivalent to Penguin’s could be found at New York University. A comparative study of the paperback revolution in the U.K. and the U.S. – which stemmed from essentially the same sources – was in the offing. 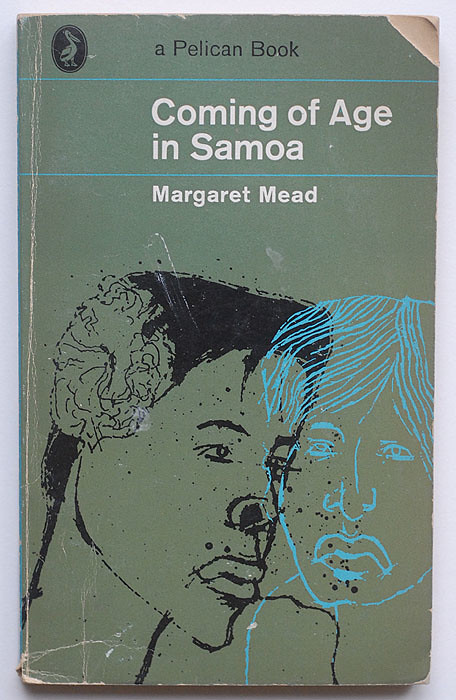 Front cover of a slightly later early edition of “Coming of Age in Samoa”, Pelican Books

As I combed through the Penguin and NAL archives, I found that the scope of the educational paperback revolution went well beyond the social sciences – to classical literature, to history (of course), to comparative religion. The differences between the two sides of the Atlantic in what sold best were not necessarily what you might have expected: psychology did better in Britain, non-Christian religion better in the U.S. Most striking – even shocking – to me were the differences in the mode of distribution. Per capita, the British read many more books than the Americans, at least at first, despite their lower levels of educational attainment. One major reason was the difficulty of selling books across America’s wide open spaces. Only big cities had bookshops in mid-20th century America. But Weybright caught up, by selling his cheap paperbacks through those outlets Riesman had spotted – drugstores, newsstands, smoke shops and variety stores.

I still have hopes of saying more about the special appeal of the social sciences, and have explored another avenue into that question in a companion paper, ‘The Language of Social Science in Everyday Life’, also recently published in the journal History of the Human Sciences. But I have come to see the paperback revolution as a major phenomenon in its own right in the cultural and intellectual history of the mid-20th-century, and not only in Britain and America. I’m happy to say that specialist studies of the paperback are also now proliferating – I cite Ben Mercer, Dean Blackburn and Gavin Miller in my paper, and I’m sure there are others. I hope my Past & Present article might help erect a general scaffolding to assist future historians in exploring this phenomenon in all its scale and diversity.