On Friday the 26th April 2019, the British History in the Long Eighteenth Century Seminar at the Institute for Historical Research hosted it’s 30th anniversary conference at UCL. The sold-out event hosted attendees from all over Britain and Europe, giving a wide perspective to the conference’s stated aim, which was to examine the current state of the study of eighteenth-century British history.

The seminar began life devoted to the political history of the eighteenth century. Under the influence of the late Professor John Dinwiddy (1939-1990) it enlarged its remit, becoming a discussion space for all aspects of the long eighteenth century, which we generally define as being the period 1660-1830. As one of the longest-running seminars at the Institute for Historical Research, over the past thirty years, the Long Eighteenth Century Seminar has developed a distinguished reputation, providing space for scholars at all stages of their careers to bring new research to an engaged and receptive audience across thematic and methodological boundaries. 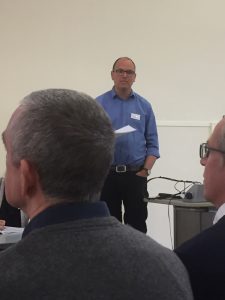 30 years as a time period, has a certain amount of resonance. It is about the time of a demographer’s generation and a good finite time in terms of studying intellectual trends, such as the rise and attack on revisionism in political history; the advent of gender, sexual, cultural and global history; and the big question for the conference – where have we got to and where are we going? The study of Britain in the long eighteenth century is a dynamic and rapidly expanding research area, with almost 30,000 books and articles published on the subject between 2007 and 2018, up 8% on the previous decade. Based on a search of the Bibliography of British and Irish History, subjects experiencing the most marked growth include the senses and emotions, the body, consumption, gender, and imperial history. Therefore, with those considerations in mind, the organisers developed a conference which sought to try and answer those questions. There was an exciting line-up of speakers from the most distinguished historians currently working on the period to the newest and most interesting young historians working in their respective areas. We also had a wide-ranging audience of all ages and all stages of their careers as well as historians working outside the academy who brought a different perspective to the event.

The conference opened with a roundtable examining recent historical ‘turns’. Identifying the influence of various ‘turns’ within the study of eighteenth-century history was a relatively easy task. Will Tullett spoke about his own work on the history of the senses as part of a broader shift towards the study of cultural history, Katrina Navickas highlighted the importance of the spatial turn to her own work on popular protest movements, while Matthew McCormack reflected on the ways in which the linguistic turn and the digitization of sources has, since the 1990s, profoundly shaped his own approach to the study of masculinity and citizenship in Britain. Although cultural, digital and spatial approaches are all demonstrable ‘growth areas’ within historical scholarship today, all three of our panellists questioned the usefulness of framing these developments as ‘turns’. A ‘turn’ suggests a ‘turning away’ from, or even a rejection of, older ways of doing history, which none of our panellists were entirely comfortable with. Rather than seeing themselves as methodological iconoclasts, the consensus was that approaches to eighteenth-century history have developed in a more incremental and interwoven fashion. Will Tullett argued that we should jettison the notion of ‘clonking great turns’, and instead adopt Katherine Gleadle’s metaphor of the knotted and interlocking root-system – or ‘rhizome’ – when conceptualising the intellectual development of the field. 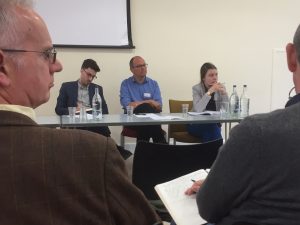 Our first thematic panel moved away from approaches and focused on two important aspects of eighteenth-century society; the state and religion. Gareth Atkins developed the themes of integration and connectedness by arguing that the history of religion should not be allowed to become ‘ghettoised’ and that social, cultural, and political historians must meaningfully link their research on the eighteenth century to recent scholarship on religious belief and the Church. Atkins argued that religion was ‘intensely personal’ in the eighteenth century and that further work is needed to explore the role of religious belief in the everyday lives of eighteenth-century men and women. Joanna Innes spoke of her personal connection to the British History in the Long Eighteenth Century Seminar, and its predecessors, dating back to the 1970s. At that time, the study of eighteenth-century history was synonymous with the study of high politics. However, in the wake of the Attica prison revolt (New York, 1971), Innes became interested in grittier (but no less political) topics, such as the development of social policy and the extent and limits of state power. For Innes, the eighteenth-century state is at once powerful and illusory. It may be embodied in sturdy and long-lasting institutions but, on closer inspection, it primarily consists of a select group of individuals engaged in the ‘routinized patterns and behaviours’ associated with the functioning of the state. In contemplation of where studies of the British state might go next, Innes suggested that the ‘power/knowledge nexus’ (e.g. the information state) requires further work, that historians of emotion have yet to turn their attention to the state, and that the ways in which Church and state were mutually reinforcing has been curiously underdeveloped by scholars of the eighteenth-century. 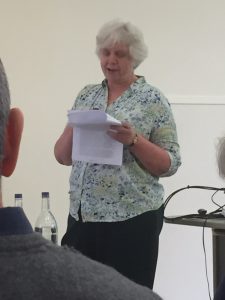 Leonie Hannan opened the second thematic panel on ‘Enlightenment and Emotions’ by examining the home as a space of informal scientific enquiry. Hannan argued that studying tacit and material practices provides us with a broader understanding of non-elite knowledge making during the eighteenth century. Her case study explored how the postmistress Ann Williams cultivated a colony of silkworms in her home in the 1770s. This approach enables us to construct a much more diffuse and diverse Enlightenment, and see a wider range of men and women engaged in the production of ideas. Sally Holloway continued the theme of practices by analysing love as something that we do through particular socially and historically determined rituals. The courting couples studied in her work deepened their relationships through writing love letters, sending and receiving engraved coins, smelling fragrant posies, and gazing upon hair-work gifts. Holloway argued that by drawing upon a much wider range of textual, visual, and material sources, we can create a much more holistic history of emotions which also incorporates the body, gestures, and senses into our analysis. 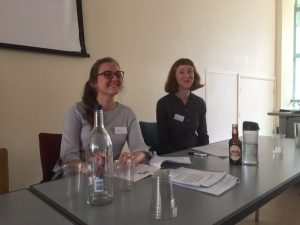 In the third thematic panel on ‘Gender and Empire’, Beverley Duguid argued that there was not one singular colonial project, but several formal and informal empires. She highlighted the drawbacks of looking to white, Eurocentric history to tell the histories of black people, and so looked to sources such as travel journals as a way to recover black voices. Her paper used Maria Nugent’s journal of her time in Jamaica from 1801–5 to unravel how Nugent raised questions of racial difference in the institutions of religion and marriage amongst black domestic servants. Kate Smith noted that women were initially excluded from histories of empire, which was presented as a characteristically masculine project. However, recent scholarship has considered the different roles of both native and European women, and the intersections between gender and race in shaping imperial and colonial identities. She explored how colonial homes were essential to aristocratic women such as Henrietta Clive in constructing a sense of gentility and selfhood, with Clive keeping detailed journals and building a laboratory to store the rocks and minerals collected during her time in Madras. 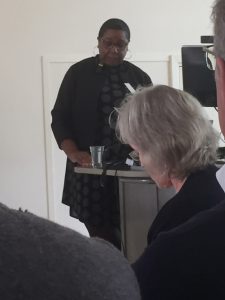 Beverley Duguid presents as part of the Third Panel on “Gender and Empire”, Long 18th Century Conference, Photo courtesy of the Organisers (2019)

The closing roundtable considered short and long-term approaches to the eighteenth century, and evaluated its usefulness as a distinct epoch. Penelope Corfield used Henri Lefebvre’s concept of trialectics to divide the eighteenth century into three distinct dimensions, characterised by 40% continuity and tradition, 30% macro-change and revolution, and finally 30% micro-change or evolution. Tim Hitchcock urged that amidst an apparent rising tide of racism and nationalism, historians must work harder to reconstruct non-Western lives. He advocated a return to a longer-term view of history, which does not neglect causation and explanation in appraising historical change. In the final paper of the day, Brodie Waddell emphasised that the long eighteenth century does not cohere as a period when studying either real wages or print outputs, stressing the arbitrariness of any start or end point. In the subsequent discussion, participants reflected on the eighteenth century more as a conversation rather than a standalone period. 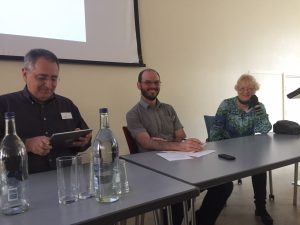 Sarah Lloyd brought the conference to a close by reflecting on some of the key terms and concepts of the day. She highlighted the prevalence of experience, practice, bodies, region, work, and space in the papers, while noting the absence of binary concepts, discourse, and identity. She finished with a call for collaboration across disciplines and chronologies, and urged greater reflection on the conditions in which we produce research in universities.

Alongside the main conference, current PhD students produced posters of their research work. They covered an amazing array of topics: from, dance and politics, emotions, transgressive femininity, loans and credit, the value of love, the public museum, architecture, astronomical discourses, the Foundling Hospital, agricultural prize medals, novels, to the Church of England. The Past & Present Society’s support was essential for facilitating this aspect of the conference, as it’s support allowed PhD presenters to travel to the conference from all over Britain, and from Finland. P&P’s support helped make this conference truly a current state of the field of eighteenth-century British history, which would not have been fully possible without the work of PhD students. 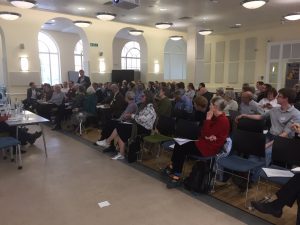 This was the first time for both the organisers and the participating PhD students to do poster presentations at a conference. We based the idea and the basic structure on scientific posters, asking the presenters to highlight the significance of their historical contribution, overarching arguments, and source material. Each presenter interpreted these general guidelines as best fitted their PhD projects.

The posters were displayed throughout the conference, with the official poster presentation during lunch. During this time, the presenters stood by their posters and talked with interested conference attendees. People took great advantage of this opportunity to survey so much new work – the poster presenters barely had time to eat lunch. Afterwards when reflecting on their experience, presenters found it to be a great way to make new academic connections and stimulate conversation on their work as a whole. The posters provided an overview of their entire PhD projects, so the discussions differed in content to what more specific paper presentations often stimulate. They were able to test how compelling their overarching theses were. In all, it was a highly successful aspect of the conference for the organizers and presenters.

All in all, it was a successful day with a great deal of intellectual engagement. We would like to thank all our funders for putting their confidence in the organising team to produce this timely event.

Past & Present was pleased to support this event and other events like it. Applications for event funding are welcomed from scholars working in the field of historical studies at all stages in their careers.

Past & Present logo, 2017 all rights reserved