by Joshua Newmark and Sophie Turbutt (University of Leeds)

This symposium, kindly sponsored by both the Past & Present Society and the White Rose College of the Arts & Humanities (Arts & Humanities Research Council), began as a relatively straightforward suggestion from our PhD supervisor, Professor Richard Cleminson, to put together a few papers or workshops around the topic of anarchism in Spain. This topic is something of a minor specialisation within the University of Leeds, where members of both the School of History and the School of Languages, Cultures, and Societies have maintained a small ‘Iberian Anarchism Research Group’ within the Centre for the History of Ibero-America. We decided not only to go for a more ambitious full-day conference, but also to truly engage with the ‘Iberian’ aspect and involve people working on Portugal, despite both of us focusing on Spain in our own research. Professor Pamela Beth Radcliff (University of California San Diego) very kindly agreed to be our keynote speaker, meaning we had the participation of one of the world’s foremost historians of modern Spain for what had been envisaged as a small gathering of postgraduate students. We also wanted a hybrid event, so as to combine inclusivity with the ability to finally have an in-person event — the two of us having started our PhDs in the midst of a pandemic and therefore having little-to-no experience of networking in person. 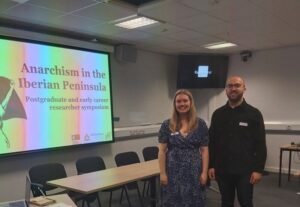 In the end, we were both delighted with how the event turned out: thought-provoking papers were delivered within an excellent and collegial atmosphere. Several speakers travelled over from Spain and Portugal, while our Zoom speakers (who all managed to participate with zero technical hitches, in no small part thanks to our technical assistants Rafik and Mahmoud) were from as far afield as São Paulo. As well as bringing postgraduate and early career researchers together with each other, we benefited significantly from the presence of Professors Radcliff and Cleminson who offered invaluable comments throughout the event as well as running a closing workshop session in the form of an open-ended discussion on the state of the field and new research directions.

The first panel of the day focused on Hybridity and Transnationality. A first paper by Dr Arturo Zoffman Rodriguez explored the impact of the Russian Revolution on Spanish anarcho-syndicalists and the development of a distinct phenomenon of ‘communist syndicalism’ in libertarian Catalonia. Alex Doyle discussed the way that empire shaped the relationship between anarchism and nationalism in Cuba during the early independence era, while Ana Campos’s virtual paper told the story of the Portuguese anarchist Manuel António Bôto and his involvement in the Spanish Civil War (Ana Campos). These papers opened up a discussion of hybridity and liminality which would continue throughout the day. 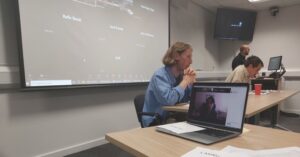 The second panel was on ‘Anarchist (Counter-)Culture’. After a virtual paper from José Pedro Reis about anarchist print culture during the first Portuguese Republic, Charlotte Byrne’s paper included a reading from her historical novel project on queer Catalan women anarchists during the Spanish Civil War and early Francoism. Waking up early on the other side of the Atlantic, Davi Luiz Paulino dialled in from Brazil to discuss Félix Carrasquer’s writings on the educational projects carried out in revolutionary Aragón (1936-1939). Finally, Henry Brown spoke about the process of militarisation of the anarchist militia during the Spanish Civil War and how anarchists’ agency can be identified in their negotiation of the exigencies of military discipline. 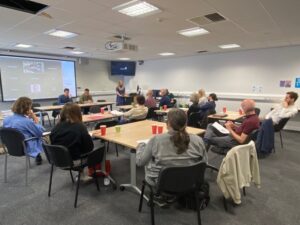 After lunch, Professor Radcliff delivered her keynote address which explored the relationship between Spanish anarchism and Spain’s municipalist tradition. She challenged the negativity shown by many historians towards the anarcho-communists — who argued that municipalities or communes were the locus of the future revolution — and the favouritism shown towards the more ‘modern’ anarcho-syndicalists who saw the trade union as the key institution of the revolution. This led to discussion on the relationship between anarchism and other political tendencies, and the issue of scale. 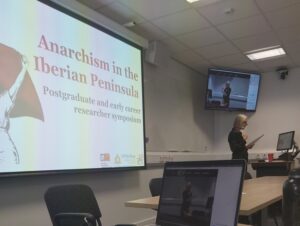 Our final panel on Modernism, Urbanism, and Anarchism was reduced to two speakers due to unforeseen circumstances, but we were treated to detailed and insightful papers from two early career researchers. Dr Francisco José Fernández Andújar drew on examples from his research into anarchism in Granada to argue that anarchism should be treated as an intrinsically modern phenomenon, while Dr Diogo Duarte discussed the profound relationship between anarchism and modern State formation in Portugal in the form of massive governmental interventions into working-class urban space. 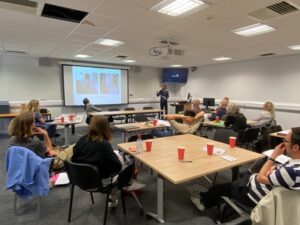 The symposium closed with an informal workshop run by Professors Radcliff and Cleminson, where they reiterated some of the important themes raised during the day and opened a floor discussion which included returning to the question of hybridity and liminality within the study of anarchism, and questions of different methodological approaches. Finally, panellists and attendees were able to enjoy a post-symposium dinner in Leeds city centre which offered a further opportunity to get to know each other properly after so many years and months of relative isolation during the pandemic.

The conference was co-organised by Leeds PhD students Joshua Newmark and Sophie Turbutt, with guidance from Professor Richard Cleminson. Generous funding from WRoCAH (AHRC) and the Past & Present Society enabled us to offer travel bursaries and utilise a hybrid space to bring our postgraduate and early career researchers together and create a space for senior and junior researchers to collaborate, as well as to provide a meal where the day’s discussions could continue. We are very grateful to all who attended for such a useful and interesting symposium and look forward to future work with this research community!

Online discussion around this event has been collated and can be viewed here.