For years I have been frustrated by many historians’ approach to women’s ‘domestic work’. Domestic work is used as an explanation for women’s failure to contribute to the same extent as men to the rest of the economy, but is rarely subject to serious study in its own right. Additionally, writers were rarely clear what they meant by ‘domestic work’, and when they did specify its meaning, it was evident it meant significantly different things to different people. My article in Past & Present #243 on ‘A Critique of Approaches to “Domestic Work”’ is an attempt to unpick these issues. It was a journey that took me to unexpected destinations, and the more I probed, the bigger the issues involved became. As a result, the article ended up being about how we conceptualise work and the economy, tracing these ideas back into the history of economic thought. And the solutions lay primarily with the work of feminist development economists and political scientists in their blistering critiques of the real-world consequences of adopting a definition of work that prioritised men’s activities over women’s. Behind all this lay the work of economist Margaret Reid, who in her 1934 book Economics of Household Production offered an intelligent and workable solution to defining (women’s unpaid) work and its contribution to the economy. Despite the fact Reid was part of the Chicago School of Economics from 1951, it was the far more problematic work of her colleague Gary Becker that rose to prominence in the 1960s, and it was not until the 1990s that the UN adopted guidelines for classifying work in national accounting based on Reid’s ideas.

The central issue of the article is how we conceptualise unpaid work within the home, work that is predominantly done by women. The commonplace present-day approach is to regard this as non-work, such as when people discuss ‘work-life balance’. In fact, what is normally being discussed is not the balance between work and life but between paid work and unpaid work – particularly unpaid care work and housework. While paid work is seen as part of the wider economy, unpaid work is not. Yet as feminists have been pointing out since the 1960s, unpaid work is actually a vital part of the economy. Estimates of the value of this unaccounted work to GDP in modern western societies vary from 19% to 60% of the accounted totals. When analysing societies based on small scale agriculture (‘peasant societies’ or preindustrial societies) the problems presented by this loose understanding of work become overwhelming: most work was unpaid, so how do we distinguish between those activities that contribute to the wider economy and those that do not? The typical approach, and the one I attempted to use in my earlier research, is to try and distinguish between those activities in the household economy that generated income and those which did not. This is impossible. Many activities were undertaken both to generate income and for direct subsistence, and other activities contributed to household prosperity by saving expenditure. As a result a shorthand often emerged (subconsciously?) among historians that saw all work undertaken by men as income generating, while women’s work was only regarded as income generating if it was paid, or very obviously led to a product that was sold (and sometimes not even then). This led to the conclusion that men’s work was more significant for the economy than women’s – but this is not a conclusion based on careful analysis of the economic worth or value of different tasks, but rather one that was inherent in the definition of work used. In other words, it was a presumption not a research finding. 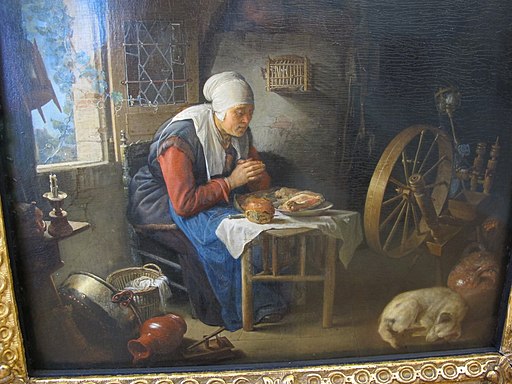 The Prayer of the Spinner, Sailko [CC BY-SA 3.0], via Wikimedia Commons

How can we find our way out of this mess? Margaret Reid suggested that work activities could be delineated from non-work activities by asking whether they could be substituted with paid services or purchased goods. If they can be substituted then the activities are work. Thus, for instance, childcare can be done by a paid worker, and cooking a meal can be substituted with the purchase of a ready-meal. On the other hand, you cannot pay someone to eat or sleep for you, or to enjoy a leisure activity (such as going to the cinema) for you. When this definition is applied to early modern England, housework and care work become part of the economy. What is more, this approach highlights a (perhaps surprising) fact about the preindustrial economy. Housework and care work were more commercialised then than they are in the modern western economies. The widespread employment of servants meant that this work was commonly done by paid workers. This also meant that early modern householders were well aware of the economic value (or cost) of such work. 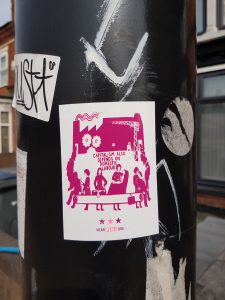 Evidence from a task-based study of women’s work, conducted by Mark Hailwood and myself, demonstrates that married women’s working lives were not dominated by housework and care work, as is often assumed. While other parts of the economy became more reliant on wage labour over time, housework and care work were de-commercialised. This was a gradual process given the large numbers of domestic servants employed in the nineteenth century, and it was only in the 20th century that the idea of a married women devoting the great majority of her working life to the unpaid care of her family and home became entrenched. Thus, the article concludes not only that housework and care work have always been an essential part of the economy, and should be conceptualised as such, but that these forms of work have an interesting and overlooked history: they are not unchanging but have been substantially transformed over time by technology and culture.