My research on the nineteenth-century Eastern Mediterranean quarantines started in an unlikely place — a Russian literary journal Otechestvennye zapiski (Annals of the Fatherland), beloved in tsardom’s liberal circles. I came across a curious report about a vaccination experiment in Istanbul. Written by a young doctor from Odessa, Artemii Rafalovich (1816–51), it described how, in 1846, he heated cowpox matter to test whether that would destroy the ability of the disease to pass on.[1] He then inoculated eight (allegedly) volunteer Istanbullite children with heated and unheated cowpox. Those children inoculated with heated matter would not develop pockmarks, which led the doctor to conclude that the heat annihilates the disease’s contagiousness. He conducted the experiment to bolster evidence that the heat destroys the matter of diseases, including that of plague, which had recently resurfaced in the Ottoman Empire and Egypt, and that the heating technique might prove useful in treating clothes and goods in quarantines. The Russian doctor’s report was my introduction to the world of nineteenth-century medical travelogues. My research on the subject was published in an article “Ottoman and Egyptian Quarantines and European Debates on Plague in the 1830s–1840s” in Past & Present no. 253 (November 2021).

A medical travelogue is a subgenre of a travelogue, which is a non-fictional, autobiographical account of one’s travel experiences written for the broader audience. Medical travelogues, written by healthcare specialists or enthusiasts, documented symptoms of illnesses, local medicines and treatments, or healthcare infrastructures of places visited.

Rafalovich journeyed to the Middle East as part of the Russian expedition of 1846–48 to investigate the efficacy of newly installed Ottoman and Egyptian quarantines. Upon his return, he published over a dozen articles in Otechestvennye zapiski and Zhurnal Ministerstva vnutrennikh del (Journal of the Ministry of Interior Affairs), read by tsarist officialdom. Another Russian expert, Aleksandr Umanets (1808–77), director of the Odessa quarantine, went on an earlier expedition in 1842–43 to ascertain whether plague was endemic in the Eastern Mediterranean. Likewise, he published detailed notes about epidemics and quarantines in the same journals. In 1850, they both released two-volume books, which focused on their experiences in Egypt. The Russian quarantine specialists were not alone. French, British, Austrian, Italian, German, and Scandinavian medics traveled to the Middle East for research and inspections, or were employed in the expanding Ottoman and Egyptian hospital system and medical schools. Many of them published rich observations about epidemiology in European journals. 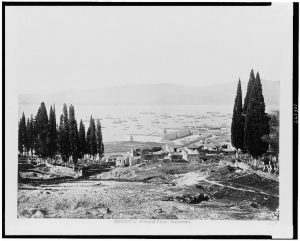 Medical travelogues form a considerable, yet relatively unexplored, corpus of nineteenth-century western travel literature. These writings were intimately tied up with imperialism and medical Orientalism. Travel accounts from the Ottoman Empire and Egypt nourished the European public’s voracious interest in all things Middle Eastern, while reinforcing unequal power relations. For example, Rafalovich and Umanets’ observations about healthcare and diseases in the Eastern Mediterranean often relied on biased assumptions about “Oriental despotism” and local populations’ poor hygiene standards and resistance to “modern” medicine.

My article on quarantine inspections and reforms examines three overlapping developments in the 1830s and 1840s. First, the 1830s was an era of intense competition between the Ottoman dynasty and the rebellious pasha, or governor, of Egypt Mehmet Ali, who waged war against the Ottoman Empire and occupied Palestine and Syria. The standardization of Ottoman and Egyptian quarantines in the 1830s occurred against the backdrop of the rivalry between the sultan and the pasha. They used western Mediterranean-style quarantines to win support of the European powers and as an economic tool against each other. While nominal Ottoman sovereignty over Egypt was restored in 1840, Mehmet Ali secured hereditary rulership over Egypt for his family. Contemporary travelers, including the Russian medical experts, regarded Egypt and the Ottoman Empire as two countries, underscored by their two separate quarantine systems and a rigorous quarantine on the border between Ottoman Palestine and Egypt’s Sinai.

Second, in the second quarter of the nineteenth century, the medical scene in Europe was split between two approaches to epidemic diseases: contagionism and anti-contagionism. Contagionists believed that plague was transmitted through contact with a sick person or their possessions. Anti-contagionists often upheld the miasma theory, whereby bad air and other environmental factors caused disease. While the former advocated strict quarantines to isolate sick individuals and contaminated possessions, the latter proposed sanitary reforms to improve living conditions in crowded cities. In the 1840s, adherents of contagionism and anti-contagionism tested out their theories in the Middle East.

Third, strict land and sea quarantines soon came under criticism from the same European governments that had demanded them in the 1830s. Ships and caravans spent weeks in quarantines, incurring losses for Middle Eastern and European financiers. The effectiveness of quarantines in preventing the spread of plague, let alone cholera, was also questioned. The European shipping companies lobbied their governments to lower the number of days that ships had to spend in quarantine or to abolish quarantines altogether. The governments of Britain, the Netherlands, Austria, and the United States were in favor of reducing quarantine periods. Greece, Spain, Italian states, and Russia were largely in opposition. By the 1840s, quarantines pitted the freedom of trade and movement against public health, which is when the governments turned to European medics and sanitary inspectors to investigate whether quarantines were effective and worth the economic sacrifice.