I write this blog post five years to the day from arriving in Fortaleza, Brazil to carry out research. The research from that trip would lead to my article Four Fishermen, Orson Welles, and the Making of the Brazilian Northeast about fishermen who protested their labour conditions by travelling sixty-one days by sail-raft from the city of Fortaleza to Rio de Janeiro and the movie that Orson Welles attempted to make about them (published in Past and Present’s February 2017 issue). I was in the Northeast in 2012 to carry out research on regionalism in the Brazilian Northeast, with a particular interest in how discourse about the region formed during international events. I had lived in Recife, the capital city of the northeastern state of Pernambuco, from 2003 to 2008. My personal connection with Recife melded with the already Recife-centric regionalist movement, making it all too comfortable to repeat the same narrative that assumed that Recife represented the entire region. I aimed, with my trip to Fortaleza (as well as to Natal, João Pessoa, São Luiz, and Salvador), to find stories of northeastern regional identity on the margins of an already marginalised region. 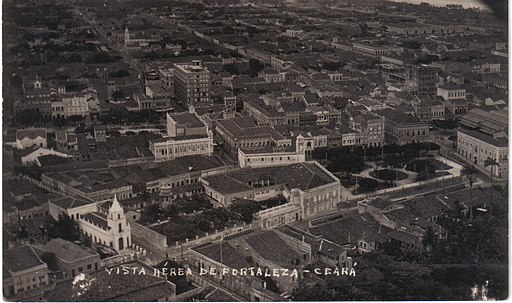 Aerial View of Fortaleza in 1936, By desconhecida (desconhecida) [Public domain], via Wikimedia Commons

I arrived in Fortaleza on an extremely limited budget and without a clear plan. Experience had taught me that the best way to carry out research in the Brazilian Northeast was to get there, get in touch with other historians in the area, and be flexible with where the stories and sources might lead you. I found a very humble room to rent in a boarding house (of sorts) and reached out to my only contact in the city: Tácito Rolim, now Assistant Professor at the State University of Ceará in Quixadá. In Recife, I had met with Grazielle Rodrigues, an engaging and generous historian with the government of the island of Fernando de Noronha, who put me in touch with Tácito. Tácito became a friend and my greatest ally in the search for sources and stories, accompanying me from archive to archive, sharing hints and suggestions, and inviting me to Quixadá to give a talk.

Location of Brazil’s Northeastern region, By Raphael Lorenzeto de Abreu (Own work) [GFDL, CC-BY-SA-3.0 or CC BY 2.5], via Wikimedia Commons

I had already heard the story of Orson Welles arriving in Fortaleza to make a movie, but I hadn’t considered it as one of the stories of region formation until Tácito suggested it to me. He mentioned a beautifully written book by another Fortaleza historian, Berenice Abreu titled Jangadeiros: uma corajosa jornada em busca de direitos no Estado Novo, which, coincidentally, had just come out that year. I became hooked on the story of the four fishermen from just down the road from where I was staying that had captured not only national, but international attention in 1941. I spent most of my time in Fortaleza hunting newspaper articles at the Menezes Pimentel Public State Library and the Institute of Ceará; art at the Museum of Contemporary Art of the Dragão do Mar Center for Art and Culture  and for cordel pamphlets (a type of popular poetry) at the Image and Sound Museum and the Museum of Art of the Federal University of Ceará. In addition, I went in search of the signing book that the fishermen had taken from port to port, which I heard belonged to the Museum of Ceará. When I arrived at the museum and requested to see this signing book, they presented me not with the original archival material, but with a hard cover for-sale volume that Abreu had published, including scanned images of the original journal and easier-to-read transcriptions. The book proved invaluable for showing how ideas about the region circulated not only among intellectuals, but among people of all ages and professions, men, women, and children, who greeted the hero fisherman at nearly every port along their journey. Finally, I arrived at an archive I would never have found without the help of Tácito (and a pair of motorcycle taxis): a personal collection held in the home of Miguel Ângelo ‘Nirez’ de Azevedo, locally referred to as the Nirez Archive. With the support of the oil-company Petrobras, Nirez had digitised his collection of record albums containing tens of thousands of songs into a searchable database of mp3s. These are the songs that I used in the article to show the resonance of the fisherman as northeastern archetype. I continued to search for sources referring to the fishermen in archives in other states, like the Joaquim Nabuco Foundation, where I found the liquor label highlighted in the article.

Location of the cities within Brazil, By CIA (CIA, The World Factbook, 2004.) [Public domain], via Wikimedia Commons

Recent conversations at historical conferences, research talks and in other professional settings; hint that political historians are (again) envisioning cultural history as standing in direct and defiant response to more traditional archival histories. I would argue, instead, that historians attempting to write the history of marginalised peoples in less funded archives have little to no interest in this debate. When outlining my research, I don’t consider which of my sources will most annoy a political historian (although I’m also not opposed to this approach); in fact, in Fortaleza, I was not thinking much about any other historians, beyond those who were kind enough to help me in my research.

Meanwhile, to the historian trained to research in well-organised, well-funded European or North American archives, the somewhat spontaneous, somewhat anthropological way of pulling together a research project outlined above might seem haphazard. Those of us attempting to construct histories of less studied areas with less funded archives, in turn, frequently hear the warning: ‘It’s just not possible. You won’t find enough sources’. In this way, I believe that the approach to cultural historical research outlined above is often the only way to carry out a social history. Picking a specific event, talking it through with historians, archivists, and journalists on the ground, seeking out less traditional archives and noting every possible source that hints at the research topic—from governmental records to popular poetry pamphlets, from recorded music to liquor labels—is a survival method. We do not (necessarily) use an ongoing historical debate as our starting point. We are not first and foremost responding to a historiographical discussion. Instead, these are the scrambles of historians attempting to pull together sources on the underrepresented before the sources disappear. Our struggles with sources reflect not only that the marginalised often produced less textual sources (this is the easy argument), but that we are still struggling to incorporate the everyday and the underrepresented in the archive and that few historians dedicate their time to reversing this persistent loss of historical record (with the notable exception of projects like those funded by the British Library’s Endangered Archives Programme like Ecclesiastical and Secular Sources for Slave Societies).

This approach to research requires not only time, funding, language skills, and flexibility, but also the ability to talk and relate with people in the language spoken on the ground. It presents the challenges of travel, unexpected archive closings, tight funding, precious time, and varied source organisation. Surprisingly, while it is a ‘survival method’, it has also proved to be one that is viable, leading to rich, deeply researched studies. In the case of my article, figuring out the topic and source base on the ground allowed for a focus on the many strands of discourse on regional identity in the Brazilian Northeast, in which I teased out what one group said and didn’t say in comparison to another: a social history, created through the methods of cultural history.

Fortaleza beach front as it is today, By Joao Carlos Medau from Campinas, Brazil (Praia de Iracema – Fortaleza/CE) [CC BY 2.0], via Wikimedia Commons