When Abanindranath Tagore (1871-1951) made his iconic painting of Bharat Mata, or Mother India, in 1905, he gave form to a vision of a united nation. The image of a saffron clad woman, holding a manuscript, sheaves of paddy, a piece of cloth and a garland visualised India (or Bharat) as a nation united by its industry, spirituality, knowledge, wisdom and ecology (see Image 1). This process of visualising – giving form to an imagination – would be repeated in many different ways throughout the independence movement of the 1920s and the 1930s (see Image 2).1 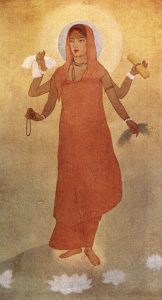 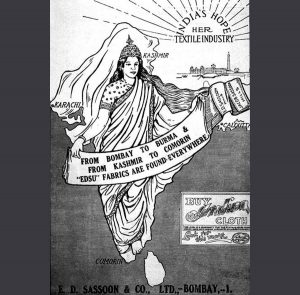 The images gave material form to the nationalist aspirations for a politically united nation, which India was not before 1950, as well as an economically developed nation, which it certainly was not. Historiography notes how vivid and diverse these visions were. Tagore’s student, Nandalal Bose (1882-1966), captured Gandhi’s vision of an Indian society built upon localism and traditional arts and crafts. Bose’s murals, painted for the 1938 Congress session at Haripura celebrated village daily lives and rural traditions, tying them to the nationalist project of swarajya, or self-rule: the murals decorated the pandals, or the temporary platforms, erected for the Congress session.2

Around the same time, M Visveswaraya (1861-1962), the engineer-civil servant from Mysore, was pioneering the ideas for economic planning in India. Writing in the aftermath of the First World War, Visveswaraya advocated the need for national plans (in the political, economic and social spheres), as well as the desirability of working out the national destiny.3 His vision of developing a new kind of ‘Indian mind’ resonated with Jawaharlal Nehru’s vision of economic and social development through large-scale industrialisation (see Image 3). Nehru (1889-1964) often acknowledged how Visveswaraya’s writings were instrumental in shaping his own thoughts about India’s economic and social future, although the two would disagree about the extent of centralised planning that was necessary.

The nationalist visions intrigued me as I was looking into the significance of technology in governance, nationalist thought and plans for India’s economic development after 1947. In writing my article ‘Rethinking Metrology, Nationalism and Development in India, 1833-1956,’ (Past & Present No. 239 May 2018), I wanted to link the technology that shaped the mundane, everyday practices of people to the profound and esoteric ideas of some of the nationalists. Historical metrology, or systems of weights and measures in the past, became a lens through which I could gaze at both the mundane as well as the profound and examine how they were linked in the minds of the people I was interested in studying.

Using metrology as my lens, I could examine not only how systems of measurements were used as instruments of rule and governance by colonial governments, but also how they were invoked by nationalists to give form to their visions of India as a unified political, social and economic space. Such a technology of the everyday was appropriated in discourses that could lay out in simple, easily understood terms what independent India could be and what needed to be done to ‘urgently’ lift the new nation out of the low living standards and poverty.4 The ‘emotional’ arguments that Nehru and others proposed melded the technocratic approach favoured by engineers, statisticians and economists together with the resurrection or preservation of traditional ways of ‘doing things’ from India’s past. It is this melding together that sets apart the case of India’s developmental approach in the mid-twentieth century. However, this narrative can be better understood if it is adequately historicised in the context of India’s colonial history. In my own way, I have tried to do just that in the article.

Looking into the past to gaze at a possible future is not unique to the historical actors I study in my article. We are beginning to appreciate how economic actors factor narratives about the past into their visions about expected futures: the act of making a financial investment (buying a house or setting up a business venture) often requires some assessment of risk versus gain.5 This assessment is based on historical knowledge as much as it is based on expectations about the future. The degree and manner to which past narratives form part of future expectations may differ, and the techniques used may differ as well (not every house buyer uses a formal financial model to inform their decision). Nonetheless, narratives about (and from) the past are used to give form to expectations about the future.

One intriguing question this raises is what do people do when narratives about the past are incomplete or have missing bits? Historians examining spatial scales have found that actors visualising ‘wholes’ often have to depend upon fragmented ‘parts’ to make up the complete picture: the missing bits are often simply filled-in.6 Do people do the same with missing information about the past?

In some ways, the people in my story ‘fill-in’ the missing bits by imagining what their past may have looked like. Nandalal Bose’s murals were not just a representation of contemporary rural life or visions about a Gandhian future. They were narratives about past Indian social and economic life which many nationalists aspired to return to: these nationalists abhorred the visions of an economically unequal country presented by colonial industrialisation, even as they grappled with the social inequities they saw around them.7

As I show in my article, India’s nationalist rulers wanted to prepare for the future by looking into its past to resurrect some ideas, whilst ridding themselves of other ideas that fettered the nation. This experiment is still on-going in the twenty-first century. The recent wave of right-wing, fundamentalist nationalism has seen some revival of historical sources of communal, religious and racial tensions. Images of Hindu chariots and deities jostle for political and social attention alongside images of cities peppered with modern high-rise constructions. What such visualisations unfold for the future remains to be seen.

For the moment though, I continue to be struck by how much the metrology of India is still tied to its colonial past. I was recently required to submit a ‘2 x 2 inch’ photograph for an official form by the Indian government, instructions that clearly eschewed metric dimensions of centimetres or millimetres. Such instructions, made after nearly 50 years of officially adopting the metric system, made me pause and think how many in India, like in the UK and US, continue to painfully ‘inch towards the metre.’8

4P C Mahalanobis, ‘Some observations on the process of growth of national income,’ Sankhya: The Indian Journal of Statistics (1933-1960) 12 (1953), 307-12. The Mahalanobis development model would be hugely influential in post-independence economic planning.

7I have set out these ideas in a separate essay: ‘Imagining Economic Space in Colonial India,’ Research in the History of Economic Thought and Methodology 36B (2018), 109-128.