Few archives I have worked in are more idyllic than the Archives of the League of Nations and United Nations Organization in Geneva (ALON-UNOG), nestled in a corner of the imposing edifice of white stone that now houses the United Nations. The squawks of peacocks wafted into windows and intermingled with the clicking of keyboards. In the distance, the silvery waves of Lake Geneva stretched toward the snow-capped peaks of the Alps, a majestic view of nature that, when it was built in the interwar period, was intended to signify the international institution’s transcendence of the parochial concerns of nationalism. This period of my research formed the basis for my article “The Desert at the End of Empire: An Environmental History of the Armenian Genocide” in Past & Present #247 (May 2020).

On the desk in front of me there in the summer of 2014 were images decidedly different than what I saw through the window: the 1920s-era intake forms of Aleppo’s League of Nations-affiliated orphanage. Known as the Armenian Rescue Home, it was operated by the Danish missionary and humanitarian worker Karen Jeppe (written about by Keith Watenpaugh, among others). Jeppe’s organization, along with many other groups, had undertaken an effort to locate Armenian children who had survived the genocide and ended up living with Muslim families. Her group devoted special attention to those survivors who lived with nomadic groups in the Jazira region. The entry form for each survivor included their hometown, age, father’s name, a biography in four or five sentences, and a photo. The staccato entries conveyed the horrors of their experiences in the brisk efficiency of an aid organization. The entries did not linger on the murder of one child’s parents on the banks of the Euphrates, or another’s survival by way of feigning death in a pile of corpses, but simply conveyed information without emotion before moving on to the identical form for the next survivor. Beside the neat, cursive handwriting were the photos of each survivor, their silent, unsmiling eyes representing both bureaucratic procedure and tenavious survival. I looked at them for hours each day, and thought about for much of my time wandering the city amidst Geneva’s bureaucrats and plutocrats. 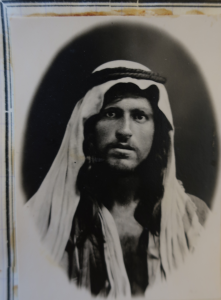 Vartivar Avakian. ALON-UNOG, Records of the Nansen International Refugee Office, 1920-1947, Registers of Inmates of the Armenian Orphanage in Aleppo, vol. 3, no. 1747. Reproduced with permission of ALON-UNOG.

I did not set out to write about the Armenian genocide when I began my research, nor did I know how long the eyes of those I encountered in the archive would stay with me. I knew I was interested in environmental history and the connections between the Ottoman and post-Ottoman world, and curious about how the motion of disease and nomads or infrastructural networks like railroads and highways changed or did not in relation to the national borders that cut up the erstwhile empire. Prior to my research trip to Geneva, I had spent the academic year in Istanbul, puzzling over the seemingly bottomless well of bureaucratic scrawl in the Ottoman Prime Ministry Archives. When archivists or friends or strangers asked me what I was interested in, I could do little more than babble a list of seemingly unrelated phenomena, unconnected even by verbs—rabies, street dogs, the Baghdad Railway, perhaps locusts? But I gradually honed this description as I zeroed in on nomads, locusts, and cholera in a region known as the Jazira as the center of the project’s focus. Arabic for island, the area stretches between the Tigris and the Euphrates at the foot of the Anatolian Plateau. Neither an Ottoman province nor a post-Ottoman territorial designation, the region typically invited confusion when I mentioned it, such as whether I meant the Arabian peninsula (al-Jazira al-ʿArabiyya) or the southeastern Turkish city of Cizre.

But the people who immediately understood what such a place name might represent offered me glimpses of the significance of the spatial frame, and why the orphanage entry forms would so shake me. I remember having what I thought would be the usual research topic conversation with someone in a bookshop in Istanbul’s Kurtuluş neighborhood, still a bastion of the city’s Armenian community. When I said Jazira, he asked nonchalantly if I would be writing about the genocide. Over the previous decade or so, the brave activism and scholarship of many—citizens of Turkey and elsewhere—had revolutionized the study of the event and its memory, and opened up avenues for public discussion (and controversy). But I was nevertheless surprised at the directness of the comment.

The Jazira, as his question suggested, was associated with the genocide because it was the event’s grim endpoint. As the empire’s Ottoman Armenian citizens were deported from their Anatolian hometowns, many were sent to the Jazira’s desert towns of Dayr al-Zur and Raʾs al-ʿAyn, and were either killed there or en route. Indeed, regardless of whether people used the term genocide or denied it, they almost all acknowledged that Ottoman Armenians had been deported to these regions (denialists invoke the desert and its “violent” nomads to claim that deaths were unfortunate accidents outside of state control, the environment and its people functioning as alibi). In fact, the association between the genocidal violence and the landscape was so great that Ottoman interior minister Talat Pasha tell American ambassador Henry Morgenthau that the Armenians “can live in the desert but nowhere else” (taking, Morgenthau added, U.S. treatment of Native Americans as a model). So, too, was this phrase used as the title in Ronald Grigor Suny’s magisterial book on the event, published to commemorate the centenary in 2015. And yet despite the omnipresence of the environment, we know little about the Jazira’s landscape beyond the deportations, since only a few scholars have treated the region before or after the genocide. The result is that the desert itself is displaced in scholarship. It is a space of violence, trauma, and perhaps even amnesia, largely disconnected from broader historical trajectories. It was in part for this reason that I didn’t have a good answer in the Kurtuluş bookshop.

My lack of an answer also had to do with the sources I was consulting in Istanbul. The terse telegrams I had looked at in the Ottoman archive did not offer many glimpses of the experiences of deportees, let alone the environment . These sources were limited by design, of course, both thanks to tight-lipped bureaucrats and archival culling. Wartime prohibitions on photos of the deportees had similarly impacted the historical record. And needless to say government documents did not speak much of subjective experiences of the genocide (or at least I was not creative enough to use them in this way). 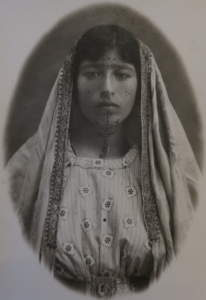 Loutfié Bilemdjian, ALON-UNOG, Records of the Nansen International Refugee Office, 1920-1947, Registers of Inmates of the Armenian Orphanage in Aleppo, vol. 1, no. 336. Reproduced with permission of ALON-UNOG.

In contrast to the euphemisms and facelessness of state discourse that I looked at in Istanbul was the vivid detail and literal faces of the orphanage entries in Geneva. There, I encountered Sarkis, whose mother died on the road and who managed to survive by working as a shepherd in the Jazira’s deserts until fleeing to Aleppo in the 1920s. There, too, I came across Veronika, who became sick during the deportations and was taken as a man’s wife, only to escape while taking wheat to the miller, who happened to be Armenian. Of course, these sources, too, are not without silences or power. But the accounts also offer an intimate view of the complicated social worlds that emerged in the Jazira, where some Armenian children managed to survive by living with the region’s Arabic- and Kurdish-speaking nomads, often occupying a place between beloved family members and coerced laborers. The lives of the survivors I encountered in the League of Nations archive pointed to the fact that the desert was a harsh landscape, but that its seasonal grasses and rains also offered sustenance to those who knew how to use them. Some spoke Armenian with their sheep, others used the remote, solitary nature of shepherding as a means of escape. Their photos reflected their nomadic lives, the men with long hair and clad in head coverings, the women sometimes with tattoos on their faces (which Rebecca Jinks and Elyse Semerdjian are writing about). And of course, some never made it to Aleppo at all, whether out of compulsion or choice. As the orphanage director Karen Jeppe wrote in a report to the League of Nations replete with no shortage of disdain for nomadism, “the vast steppes and the aimless nomadic life” in some cases “lured” Armenian survivors “back.” Some eventually returned to Aleppo, but others didn’t. Their memories survive to this day in the Jazira, the Hagop who became ʿAbdullah. What these stories reveal is how the desert functioned as both a weapon, and as a means of escape, not only from the physical violence of the genocide but also from the nationalist visions that both fueled the genocide and structured the humanitarian campaigns in its wake. The springtime flowers between the Tigris and the Euphrates were far away from the alpine views of Geneva, but it was there that I could appreciate how the Jazira was the desert at the end of empire.