by Rob Fitt, University of Birmingham

A week on from the Everyday Empires conference I was sat in that most British of institutions, a pub. My thoughts turned to writing this post and what had stuck in my memory about the case studies that were presented. I glanced to the bar and noticed that union flag bunting adorned the top shelf, above the pub’s logo of a cow made somehow more British with the addition of a hat. I recalled an interview I had read prior to the conference between two historians of empire, discussing the contemporary resonance of the British empire in a country under going a pre-Brexit existential crisis. Much has been written recently about the role of ‘imperial nostalgia’ in the decision to leave the European Union; of plucky little Britain able to punch, independently, above its weight in the realm of global affairs. To suggest that a half-remembered nostalgia has such direct causation is of course short sighted, but the arguments for its acting as a contributing factor in the referendum on EU membership are compelling. What struck me about the interview in question was the argument that Brexit represented a ‘harder cultural turn’ from a preceding period of more innocuous imperial nostalgia coloured by an aesthetic of ‘empire chic’ – of royal wedding street parties, the opening ceremony of the London Olympics, of bunting, and gin and tonic drunk from tea cups.1

So much of the conference had invoked the senses – how empire was experienced through sights, smells, tastes, and the handling of objects, and how this reflected tensions at the heart of imperial rule; tensions of gender, race, and perceptions of national identity. Research into material practices was presented across scales, from the games played by Indian children, food, and rickshaws to grand imperial engineering projects, economic models, and tourism. With this in mind, and with the bunting above the bar reinforcing what had been said about empire aesthetics, I considered to what extent our current everyday material practices remain coloured by our colonial past, and what that says about contemporary understanding of our history and our national identity.

One glance at the cocktail menu revealed more. In the same way that children’s games were appropriated by colonisers, and how curry has been rebranded as a staple British (or more specifically ‘Brummie’) food, the cocktail menu also demonstrated an appropriation of foreign sensations, rebranded as quintessentially English. Singapore slings, spiced sangria, mojitos, and gin and tonic were listed next to images of the hunt. Riders on horseback, resplendent in red complete with top hats, decorated the pages and served to equate such drinks and the practice of drinking on ‘lazy days in the sun’ with the overtly traditional British iconography of the hunt. While of course being the preserve of the rural upper classes, the imagery is nonetheless uniquely British and the implied connection between such ‘Englishness’ and the exotic drinks on offer seemed overt. The apparently complementary mixing of the exotic (citrus fruit, spices, and spirits) with the traditional and familiar (London gin, rhubarb, and lemonade) belies the tension at the heart of the material practices and in between spaces of empire, where states and ideas intersect. 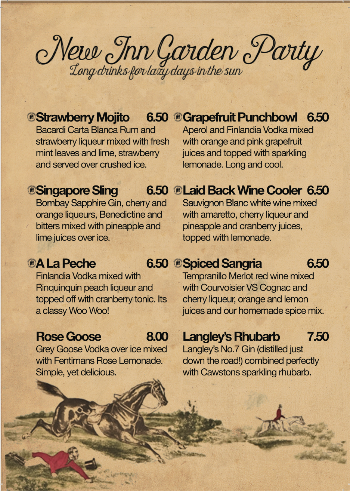 At home, further examples arose (and for the purposes of this post I will stick with drinking as an example) in the form of a cocktail shaker emblazoned with the logo of Opihr gin. The intricate art of the orient forms two elephants surrounding a traditional British crest, complete with crown, wreath, and union flag. ‘Oriental spiced’ precedes ‘London dry gin’. Again, there emerged an imperial aesthetic which seeks to convey the complementary conjoining of the exotic and the familiar, of the colony and the metropole. The apparently complementary fusion of the two, presented in the ‘everyday’ material practice of alcohol, is indicative of the collective amnesia about our imperial past which pervades current socio-political discourse. It is a past that is invoked in debates about the future, and a past in which the violence of colonisation is overlooked in the popular imagination in favour of aestheticising the exotic and the ‘imperial adventure’, the benevolent coloniser, as a cornerstone of our exceptional national destiny. 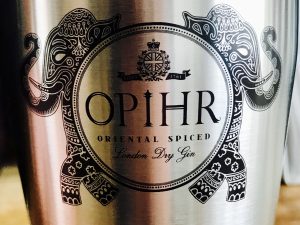 In truth, however, the material practices of the everyday examined in the case studies for Everyday Empires served as sites of resistance, ingrained with the hierarchies of gender and race that were central to the lived experience of empire. These practices escaped the imagined geographical boundaries of colony and metropole, illuminating the permeable nature of these ‘fantasied cartographies’. Tourists and postcards transported more than just people and greetings, but culture, ideas, and perceptions of nations across borders. Foreign expertise was not the only thing imported when seeking to undertake engineering projects: notions of gender were reinforced. Some concepts did not travel well internationally; the archetypal western hospital struggled to translate to India, becoming a site of resistance and cultural contest. Through everyday practices there emerged an everyday politics of imperial sovereignty, which was continually negotiated and reinterpreted on the ground.

These case studies provide historical precedent for the ongoing contemporary tension between increasing globalisation and the enduring allure of the nation state as a container of cultures and ideas; a hermetically sealed site governing our interactions with the wider world. Nationalism and race remain potent political capital, and a mis-remembered collective memory which takes the sting out of the past can only serve to misinform our plans for the future. Our own everyday practices are carriers of our history, and remain imbued with what we think we know about the past. The examination of imperial history through the lens of the ‘everyday’ is both a timely reconsideration of the past, and of pressing relevance in the present.