In March 2016, I gave a short course at the University of Sao Paulo on ”The Origins and Development of Swedish Egalitarianism”. Having worked on Swedish historical income and wealth inequality for some years, I was giving a course on Swedish history, and I thought this was a topic that could be of interest. Because, when presenting results on Swedish income or wealth distribution for an international audience, there is a more or less fixed set of assumptions/ideas about Swedish history and society than one must address to make the discussion intelligible (or interesting?) for non-Swedes. They are, roughly: “Everyone is [was] a Social Democrat there”. “It was always a society of free farmers, without feudalism”. “Lutheranism created Social Democracy”. “Farmers created Social Democracy”.

What these different formulations have in common is the idea that Sweden was somehow always different, more egalitarian, meaning any 20th century achievements in terms of egalitarianism and social cohesion is “just” a continuation of a much older history. These assumptions are not often formulated directly and developed (but Bo Stråth explicitly uses the concept of a Sonderweg to analyse the Swedish case, and Eva Österberg and her students argue for a “Swedish model” from the 16th century), but tend to crop up in more informal discussions. Brad DeLong’s book review in the Journal of Economic History of Peter Lindert’s great book on welfare state history is instructive. Delong:

“I was unconvinced by the case study of Sweden. Sweden is just too weird a country for what goes on there to be taken as representative or illustrative of processes that go on in other advanced postindustrial economies. The peculiar nature of Sweden’s Labor Organization, the role of the Wallenberg family, the extremely high export orientation of the Swedish economy, its extraordinary homogeneity, the fact that it had a House of Peasants in the Ståndsriksdagen since the 1436 meeting at Uppsala in the aftermath of Engelbrekt Engelbrektsson’srebellion, and so on make me extremely leery of drawing conclusions from and attempting to apply the Swedish or more broadly the Scandinavian model elsewhere.”

I think that this is a rather typical view of Sweden in the international academic community – it is a “weird country” of peasant democracy since the days of yore. My recent Past & Present article “The Swedish Sonderweg in Question: Democratization and Inequality in Comparative Perspective, c.1750–1920” (#244, open access) is an attempt to address these preconceptions and get to the root of these issues: can we really identify a specially egalitarian Swedish road of modernization, a Swedish Sonderweg? (Which we Swedes tend to think as well!) 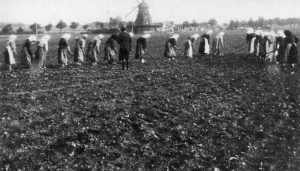 Swedish sugar beet plantation in the late 19th century at the Säbyholm estate in the south of Sweden. Photo held by the Swedish Emigrant Institute, Växjö, Sweden. image in the public domain via Wiki Commons

What I found with my colleagues when we were working on wealth and inequality from 1750 to 1900 was that Sweden actually wasn’t very egalitarian at all, in terms of wealth ownership. When I started looking in more detail on the historical income inequality research, I found the same there. And when I read up on the political and constitutional history of Sweden and some comparable countries (mainly, for linguistic and other reasons, Denmark, Norway, Germany, Britain and the US), I was even more surprised to find that Swedish politics nationally and locally in the nineteenth century was actually extremely unequal, with the most restrictive and unequal suffrage rules in west Europe. My synthesis of these different strands of research is that it is misleading to talk of a Swedish Sonderweg. The egalitarian tendencies of Swedish society only emerged from the 1870s onwards, with massive popular mobilization against the very unequal society the Swedes lived in then.

Thus, my argument is one of historical ruptures, rather than continuities. Here I was really influenced by Geoff Eley and David Blackbourn’s old book The Peculiarities of German History: Bourgeois Society and Politics in Nineteenth-century Germany (1984). When I read it a couple of years ago, I thought that their dismantling of the German Sonderweg story was just so good. They show convincingly, in my opinion, that applying a comparative perspective means that you can see not only that what we have said about our own country’s specificities is misleading and often based on cherry-picking of our own history, but also that such national narratives tend to build on distorted views of what the comparable countries were like. I hope that my article can show something similar in the Swedish case. I hope that it can give a more nuanced view of the mythologized Swedish past, and perhaps convince some readers of the merits of my alternative interpretation. But I also hope that it can encourage the more Sonderweg/long continuities minded historians to make their continuity arguments in a more theoretically stringent way. They tend to implicitly assume that (political) traditions reproduce themselves over long stretches of time, and survive drastic social changes. So for example, an “egalitarian political culture” formed in the peasant society of sixteenth-seventeenth century survives industrialization, urbanization and democratization, and crops up again in the twentieth century. Previous historians have presented this as something unproblematic, but I don’t think it is – wouldn’t we expect the very drastic social changes over those hundreds of years (the fall of absolutism! Democratization! Etc.), to have effects on political cultures too? I would like the continuity-minded historians to put more effort into explaining stuff like: under what conditions do political traditions, like an egalitarian political culture, survive or reproduce themselves over an extended period of time, rather than disappear with , say, political or economic crisis? I also hope that my article shows that Swedish history is much more tumultuous and interesting than we tend to think, and stimulate further comparative research on the topics of inequality and democratization.