We might reasonably expect that throughout the year their working hours were much more closely correlated with the hours of daylight than our own: that you worked when it was light, and slept or rested when it was dark. Having just reached 1000 entries in our work activities database (we are aiming for a total of 5000) I am currently extracting some preliminary results, and I thought this would make an interesting hypothesis to experiment with. In recording our work activities we include any information given about the time that the said activity took place. We have times for 186 of the 1000 activities recorded so far, so a fairly small sample, but taking a look at their distribution across the day is nonetheless suggestive: 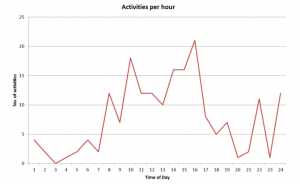 What the graph suggests is that most work activities took place between the hours of 8am and 4pm, with much lower levels of activity outside of those hours. Of course, this doesn’t in itself tell us much about the impact of daylight hours on working hours, so let’s break it down into ‘Summer’ and ‘Winter’:[1] 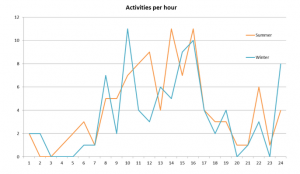 What’s curious here is the fact that there doesn’t seem to be any major difference in the main hours of work activity across the seasons – the activities we have times for are generally concentrated between 8am and 4pm all year round, hours when it would have been light whatever the time of year. Was it therefore more the case that the extra hours of daylight in summer did not extend the working day, and not that the shorter hours of daylight in winter curtailed it?

Perhaps our sixteenth and seventeenth century forebears were not early risers, even when the sun was. That was certainly true of the village blacksmith of Bickington, Devon, who was called upon one September morning in 1670 by Jane Maddock, who was journeying across the county and whose mare needed a new shoe fitting: she tells us that ‘he would not rise being near about day breaking’. That was probably around 6am at that time of year, and although it would have been getting light our evidence does suggest that was an early hour to be working – the slumbering smith seems to have thought so. It was ‘an hour after sunrising’ before she was able to rouse a smith in a neighbouring village to do the deed.

There is, I think, a lot more to be said about the hours of work and patterns of time-use in this period, and hopefully our results can contribute to some of the major debates in economic history that focus on these issues.[2] For one, it will be interesting to explore whether there is a strong gendered pattern to work hours: at present it is hard to say, as only 35 of the activities we have times for were done by women, so it is too small a sample to say anything with confidence. That also applies more broadly – I wouldn’t want to put too much weight on any findings at this stage, as we need more data and more time to think carefully about what it shows. But it looks like it will be an interesting avenue for us to explore.

So, we’ll be revisiting these important questions in due course, but for now I just want to return to the issue of work and daylight and concentrate on something else that stands out from these graphs: the bursts of activity around 10pm and midnight. As you may well have noticed, whilst the graphs suggest a concentration of work activities between 8am and 4pm, they also contain considerable spikes at these two late hours at all times of year. In fact, around 15% of the activities we have times for took place between 10pm and 1am. What was going on here, and who were these ‘night owl’ workers?

An important part of the explanation for this surprising surge of after-hours activity is the nature of the sources we are using. Much of our data comes from depositions submitted to the quarter sessions (a criminal court), and many of the late night activities we have recorded have a connection to criminality that helps to explain their occurrence at night. For instance, several involve the slaughter, skinning and dressing of sheep. These activities were often carried out shortly after the stealing of said sheep, something which – for obvious reasons – tended to take place under cover of darkness.[3] In most cases it would not be long before the animal was missed and the constables would come searching, so getting it chopped up and in the pot as soon as possible was expedient, and these activities were often therefore undertaken the same night.

There are also several examples of people fetching wood during these hours. It may simply be that people often ventured out into the night to find additional fuel as and when the fire burned low, but it also seems to be the case that ‘I was out fetching wood’ was a common form of alibi for those who fell under suspicion of thefts committed during the night.[4] It may be that this latter fact distorts our evidence, and makes it look like a common night owl activity.

But not all of this late night activity can be explained away by a close connection with criminality. Sometimes perfectly innocent work activities were attested to by witnesses who were going about them when they saw others commit a crime. For instance, on 25th October 1661, John King of Bishopsdown, Wiltshire, was ‘up that night about 12 of the clock to feed his horses’ when he saw someone sneaking out of his barn with a bushel of wheat.

Recent work on pre-industrial sleep patterns may be of relevance here. It is now fairly well established that before the nineteenth century our ancestors did not sleep through the night. Instead, they followed a ‘biphasic’ sleep pattern, settling down between 9 and 10pm for a ‘first sleep’ that lasted until around midnight, followed by an hour of wakefulness that could be spent talking, reading or praying – or possibly, we might speculate, doing a few work tasks – before returning to bed for a longer ‘second sleep’ that lasted until day break.[5] Whilst this doesn’t exactly line up with our evidence – it doesn’t fit neatly with our burst of activity around 10pm, supposedly bedtime – it might in part account for our midnight spike, with people making use of the window between ‘first’ and ‘second’ sleep to undertake some work tasks – such as feeding their horses. 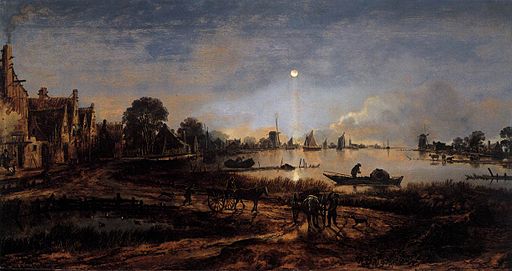 Perhaps the Devonian worsted comber Hugh Hunsdon, of Plympton St Mary, had recently awoken from his ‘first sleep’ when he was spotted ‘at his door liming of skins… between 10 and 11 in the night’ in July of 1690. Or maybe he was just working late. Either way, night owl workers such as he would have needed a source of light. A fire no doubt provided some assistance to those working after sunset, but the candle was the real linchpin of pre-industrial lighting. Indeed, when placing events at a particular time of day, seventeenth-century deponents were more likely to make reference to them occurring ‘about’ or ‘just after’ ‘candle-lighting’ or ‘candle-lighting time’ than they were to say ‘after dark’. They did not think of the day in terms of periods of ‘light’ and ‘dark’, but rather in terms of periods lit by the sun and those illuminated by the candle.

There is, of course, another explanation for Hugh Hunsdon’s moonlighting… moonlight. He was, after all, working at his door, perhaps to better catch the light cast by the moon, and it was surely an important factor in supporting another type of common night-time activity: travel. Jane Maddock, who we met earlier, had travelled through the night, and John King had been feeding his horses at midnight ahead of a pre-dawn start to make a journey the following day. People travelling to market often set off in the dead of night to ensure their timely arrival, and other examples in our database include people returning home late after a long day ‘being abroad at business’. Travelling at night was presumably hazardous, but our sample of coroners’ reports records no accidental deaths related to travelling occurring between the hours of 8pm and 6am – it seems likely that the light of the moon played a key role in helping travellers and their horses to keep their footing.

Finally, another category of work activity that features prominently in our late night examples is river fishing. With some fish being nocturnal there may have been good strategic reasons for this, and a moonlit night may have been seen as a good opportunity to put in some extra hours to catch food for the table. Once again, though, the criminal component of our sources bears heavily on the evidence here: William and David Mare of Tavistock, Devon, were twice seen fishing with ‘a net hanging on a long pole’ on the River Tavy, at a place called St Mary’s Pool, in July of 1690 – once at 1am and once at 4am. The reason the witness reported their activities to the local authorities was because these men did not have the right to fish there. Again, our night owls were operating at these times to try and avoid detection.

This is a useful reminder to finish on: analysing the evidence of work activity times requires us to be sensitive to the ways in which our sources shape and influence the information we are able to gather – a point of broader applicability to all of the results our project is producing. As we have seen, many of the late night activities we have recorded were in some way criminal, and this is probably the main explanation for our spikes at 10pm and midnight. But not all night time activities were illegitimate – we have seen that people also made use of the night to travel, to feed their horses, or even to lime skins at their door. So, the evidence of work times we have considered here does seem to suggest that the dark of night did not entirely put a stop to the work activities of men and women – legitimate or otherwise – in the sixteenth and seventeenth centuries. Aided by candle- and moon-light, they too, at times, went to work in the dark.

1I’ve taken ‘Summer’ as April to September (99 work activities) and ‘Winter’ as October to March (85). 2 activities for which we have times specified do not specify a month, so they are not included in these 2 graphs.

2For some of these debates about time-use and working hours, and their central role in explanations of economic development, see Hans-Joachim Voth, Time and Work in England, 1750-1830 (Oxford, 2000); Jan de Vries, The Industrious Revolution (Cambridge, 2008).

3Whilst we wouldn’t record the theft as a work activity, we do include legitimate work activities undertaken on or with stolen goods, such as slaughtering and skinning stolen sheep. For more on our recording criteria see our previous post on Finding Work in the Archives

4In such cases we include alibis as plausible accounts of work activities: we do not want to try and judge ‘the truth’ of the cases we are working with. Again, for more on our recording criteria, see our Finding Work in the Archive post.