Past & Present were pleased to support Antonia’s Story: A Secret History as part of the recent Being Human Festival. Jointly organised by The British Academy, The School of Advanced Studies at the University of London, and the Arts and Humanities Research Council, Being Human is a nationwide festival celebrating and sharing the latest research and discoveries in the humanities.

This year, the festival theme was Discoveries and Secrets. Antonia’s Story invited people to discover the history of a lady called Antonia Grandoni, which a team of researchers had found in the newly-digitised United Kingdom Medical Heritage Library. Antonia became the subject of unique participatory research project, whereby co-researchers with learning disabilities worked alongside academics to investigate and analyse Antonia’s story. The twin aims were to examine historical attitudes towards what we now call learning disability, and to use Antonia’s story to help make sense of the experience of living with a learning disability today.

We found Antonia’s story in a book called On Idiocy and Imbecility, written by Dr. William Ireland and published in 1877. What made her story so compelling was that Dr. Ireland’s account included two pencil portraits as well as details about her life both inside and outside the institution in Italy where she spent many years up until her death at the age of 41. Her diagnosis at the time was “microcephalic idiot”, meaning that she was thought to have very low intelligence because of an exceptionally small head – and therefore brain.

There were two teams of researchers. One was based at The Brain Charity in Liverpool and associated with Liverpool Hope University. The other comprised members of the Teaching and Research Advisory Committee at the University of South Wales, where they advise and teach on learning disability nursing courses. Both groups analysed Antonia’s story and then created artworks to express their responses to Antonia’s story, and how it related to their own lives. You can find out more about the project via its website and this JISC blog post. 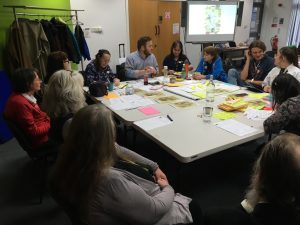 Our Being Human event comprised an exhibition and workshop, designed to showcase the creative works produced as outputs from our research, and to give visitors opportunities to try our research methods. Guided by researchers from both groups, they were able to analyse Antonia’s story and then make collages and drawings in response. The idea was to show visitors that researching learning disability history can be creative, inclusive and fun – even as it uncovers powerful, and sometimes disturbing – narratives. 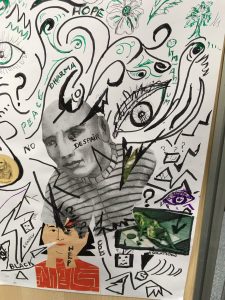 The day was a huge success, with over 50 visitors to The Brain Charity participating in the event. Feedback was universally positive, with those responding unanimously rating their experience as either Good or Excellent. We were featured in the Being Human festival Twitter highlights and blog. Fittingly, given the researchers’ desire to re-humanise Antonia, as a counterpoint to Dr Ireland’s dehumanising account, the day finished with an impromptu poetry workshop. Researchers and visitors alike contributed to a collectively written poem: I Am Human – Antonia. 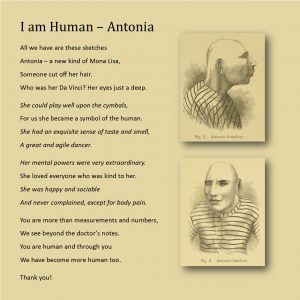 I am Human-Antonia, poem graphic, received from Owen Barden 2019