I’m not sure how I got involved in this – Peter [Hill] is almost certainly to blame.

I was reasonably familiar with much of the literature on international political economy up until about 2005, when I was still teaching a lot of political and historical sociology. If I had been asked about my views on that literature then, I would have been critical. On the one hand, it was not clear to me that mainstream economists actually understood how things worked in reality, despite their impeccable models. On the other, I felt that their critics on the left tended to be hide-bound by a Marxist view that we know what the essential characteristics and end-game of capitalism are and we just need to understand what has enabled it to postpone that destiny. My sense was that neither group did much to advance our understanding of power, which was too often understood reductively in terms of control of capital. More importantly, both groups had difficulties in grasping the complexities of exchange, tending to reduce it either to an idealized, frictionless transaction of equivalence, or to outright exploitation.

When I moved to a History department [Warwick] in 2013, one of the early reading groups I was involved in went back to Polanyi, which I think I read with more care this time. This was also at a point that I was reading a lot of work on corruption and anthropological literature on exchange, the functioning of markets and households in Africa, and thinking about issues of precarity and migration. Going back to some of the earlier literature (which we did in some of the group sessions), and (mostly) reading new material – which was often very stimulating – has helped confirm me in a number of views that I detail below.

The first is that big-picture accounts are more suggestive than they are powerfully illuminating or helpful in explaining either differences or similarities in development. The idea that by moving to a certain level of abstraction we can see the order underlying the chaos of detail is an extremely attractive one, but it deserves a substantial degree of skepticism. We need to ask what is generating the data we rely, so that any pattern is not merely a function of what we collect and how we collect it. We need to avoid the kind of backward induction that attributes causal properties to the patterns we identify. And we need to resist the idea that past patterns are in any way necessarily predictive. These all need to be avoided because the phenomena being analyzed are not natural but social, and their properties are a function of our conceptualization that is purposive in character and not adequately independent from the analysis we then apply to them. The analyst and his or her tools is as much a part of the explanans as the elements he or she tries to explain.

The second is that accounts of the invention of ‘the economy’, while sometimes fascinating, are always at risk of teleology. They often seem to focus on explaining how we got here, rather than providing us with a basis for understanding better where here is and what its possibilities are. We need to avoid, for example, a binary reading of a gift economy vs a market economy developing in the early modern period in which we explain what we see as our world emerging from the Early Modern one (that is critically assessed in Laurence Fontaine’s The Moral Economy), which was certainly a common way of reading Polanyi’s ‘Great Transformation’ (encouraged by the title, but certainly not always by exactly what he says). But in a lot of the literature, the idea of ‘the economy’ emerging, overstates the homogeneity of that entity and its independent impact on the wider social and transactional world. In the wake of Michael Walzer’s Spheres of Justice a literature on blocked exchanges developed, and then rather petered out, although we can see something of a parallel development in some of the anthropological literature. What both literatures point to is the extent to which the parameters of exchange that economics takes for granted in its models, where utility or welfare functions are presumed to treat all values as fungible or reducible to a single linear scale, are rooted in particular social and political forms, that block certain transactions and enable others, that structure ideas of correspondence and equivalence, and are differentially enabling to the parties involved. As such, as I read this alternative literature on exchange, we should always be thinking of economies (plural) rather than the economy (simpliciter).

The third thing, and the reason I was interested in looking at Granovetter’s more recent work, is that, while I think there is a danger of being overly reductive in the distinction between strong and weak ties, it seems right to insist that relations are multiple, that they come with different sets of expectations and obligations, that they empower and disable people in different ways, and that societies need to be understood as complex phenomena whose transactional regimes may differ dramatically in relation to certain goods, or in relation to certain people or positions within society. But, above all, Granovetter reminds us that we cannot strip the social out of the transactional. It has always seemed to me that a great deal of analysis in economics and in international political economy does that with gusto. 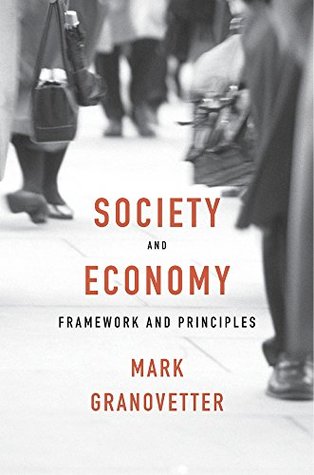 The fourth thing is that the language of economics contaminates its own understanding of agency and power, and that tends to be inherited by perspectives that seek to explain the ‘success’ or supremacy of capitalism as a mode of production. The simple claim that exchange involves equivalence in utility helps strip accounts of agency. So we talk about flows of capital, the behaviour of markets (as in clearing), and the mobility of factors of production. In none of this do we get any sense of the power exerted by some over others, the degree to which choices are constrained or coerced by the lack of available alternatives (often thanks to the agency of others), or the extent to which entrepreneurial activity has designed systems (especially in relation to financial flows) that bet upon the bets that are made by those who predict the future performance of commodities, stocks, companies, and economies, and in doing so engender even greater volatility into the system. The talk of flows and behaviour is no more natural than the phenomena to which they are applied. Similarly, ‘de-regulation’ carries a mythical allusion to a free natural state, when it is better understood as whole panoply of ‘re-regulation’ decisions, urged by various interests in some of the more powerful economies (who have hardly been pressing for the removal of regulation that protects private financial property). This agency-less world becomes – as a direct result – a world without power; or, at best, a world in which power is understood wholly as an accident or incidental to financial resource terms. But that world is a massive fiction, that ignores the differential power conferred by the legal protection of certain types of property holding, the limited liability that investors benefit from, their greater access to a range of forms of capital that allow them to buttress their command of the economy, etc.

The final thing I would say – other than that ‘I have found the reading group a really engaging way of thinking about all these questions’ is: that it has convinced me that there are many economies and many capitalisms, even within a single setting. We need to think of modern world as a chaos of patterns of relations of cooperation and competition between differently configured societies and political and economic regimes with historical path dependencies whose long-term prospects are pretty unpredictable. Pace their defenders, the ideologies that underlie western neo-liberal systems are no less confused and contradictory than those that operate in the more clientelist systems of the far east or those of state-capitalist economies such as China. In all forms the economic and the social are closely intertwined and transactions aren’t as separable from their context as economists tend to think. That also means both that a plurality of capitalisms and economies is inevitable, and that we should be thinking about these patterns and structures less in terms of capital and the economy, and more holistically in relation to their social contexts – where those contexts are variously defined and bounded, with states, boundaries, legislation, property regimes etc. always structuring ‘the economy’.

This piece is part of a series on Political Economy and Culture in Global History, derived from a collective discussion project of the same name, supported by the Past & Present Society (among others). You can read an introduction to the series here. These pieces accompany a virtual special issue of the journal Past & Present, which will be published in October 2020.