by David Holland, University of Sheffield

I recently presented the research associated with my Past & Present article at my History department’s weekly seminar. Like the article, the paper outlined my investigation of South Asian immigration and settlement in the Sheffield area between the First World War and 1948. During questions, one of the academic staff asked me that, considering the race riots which struck a number of major British ports in 1919-1920, might I be a little too sanguine in my assessment of race relations during the period? My immediate response was that although those destructive events rightly inform my research and analysis, without a ‘sanguine’ approach which focused on marriage and belonging, a previously un-researched settlement would have been much less likely to have come to light.

The violent events referred to – so vividly described by Peter Fryer and given substance by Jacqueline Jenkinson’s research and analysis – are indeed, as my questioner suggested, regarded as key indicators of the working-class population’s outlook toward perceived racial difference. Before undertaking my research I also subscribed somewhat to this generally pessimistic view of early encounters between white working-class natives and non-white newcomers. However, my investigation of smaller-scale, but far more frequent, interpersonal encounters revealed an entirely different facet to the history of the era. It indicated that although the riots remain, without doubt, important factors in our understanding of the inter-war period, they do not entirely reveal relations between natives and non-white newcomers. Unfortunately, this other side to the story: the frequency of mixed-marriages, the births of children and the evidence of the everyday lived experience of native-newcomer relationships among the working-class population has tended to be overlooked.

My research began some years ago when, as an undergraduate, I conducted an oral history survey of the experiences Sheffield-based Pakistani settlers who arrived in Britain during the late 1950s and early 1960s. The son of one of this group alerted me to the presence of a small inter-war cluster of graves of Indian Muslims in a local cemetery. This very early South Asian presence was obviously worthy of attention. But what particularly interested me was the epitaph on the headstone of the infant Souriya Khan (see image). It reads: ‘In loving memory of Souriya, beloved daughter of Ayaht and Hilda Khan, died July 30th 1929 aged 9 months (Mohammedan religion)’. What I find remarkable about this inscription is that it commemorates a child born to a working-class couple comprised of a Sheffield native and a South Asian newcomer and who were bringing up their daughter in the Muslim faith during the late 1920s.

On first inspection Souriya’s grave might be viewed as a somewhat anachronistic curiosity in an inland city in which the South Asian population is viewed as having only begun to arrive in the early 1950s. Nevertheless, despite the fact that the burial fell outside the scope of the project in hand, my interest was piqued. No doubt this was partly due to my own experience as a child born to a white British mother and Asian Muslim father and growing up in white working-class neighbourhoods in the 1960s and 1970s. I do not count my personal circumstances as a necessary credential for studying this subject. This is simply an observation of how a personal experience or preoccupation can impose itself on research in unexpected, but sometimes very fruitful, ways. 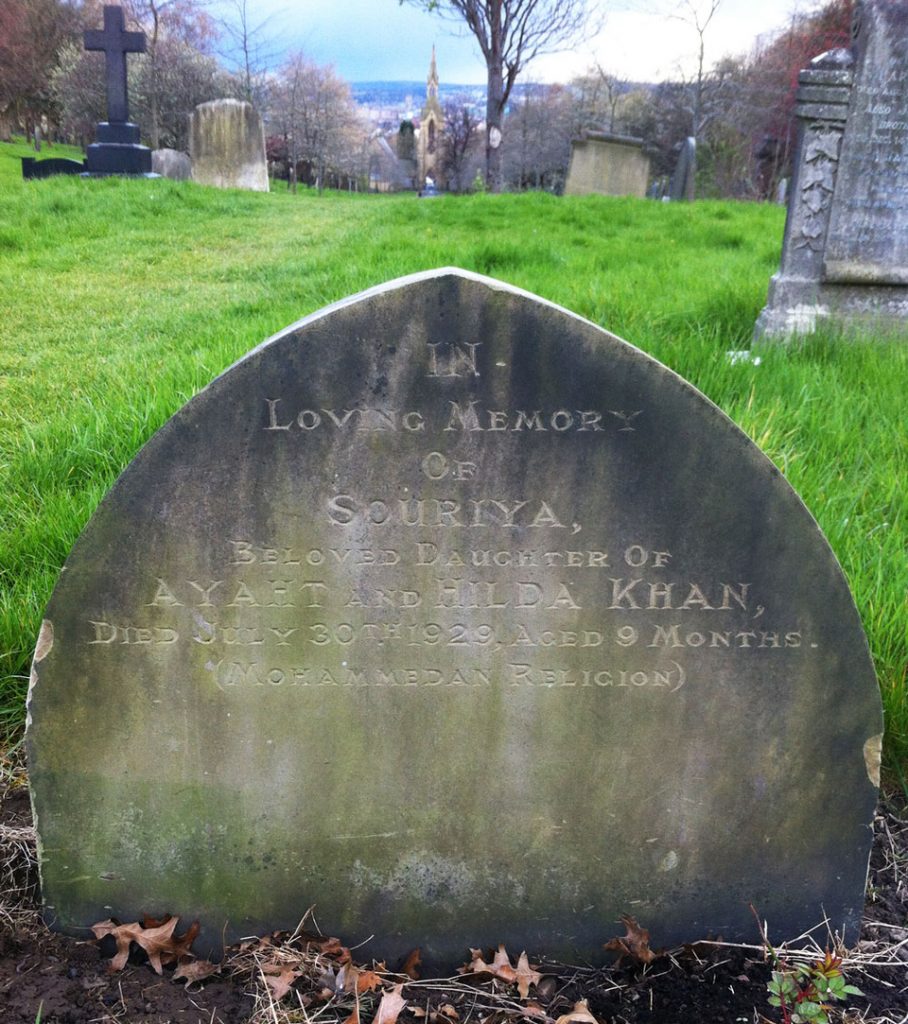 Further investigation revealed that Souriya was not a geographically and historically isolated example of a child born of a ‘mixed’ relationship. Rather, she turned out to be part of a cohort comprising at least 338 male migrants, their native British wives and their children, all of whom lived in a city with no previous claim to be a site of pioneering migration and settlement. The method I used to investigate these previously hidden lives primarily involved targeting instances when natives and newcomers came together as couples, had children or simply shared the intimate spaces of hearth and home. Many of these individuals appeared at some point in the General Register Office’s records of births, marriages and deaths, electoral rolls and the 1939 Register. Others’ activities occasionally appeared in press reports, but never in association with racially motivated mob violence. The collated data has been used to plot a tentative map of the locations of marriages involving Muslim-named individuals in Britain during the period. In this way clusters of migrant settlement have been provisionally identified. While not able to provide definitive migrant population numbers, this approach to historical migration research can geographically identify migrant population clusters worthy of further investigation.

The data was also used to locate and discreetly contact a small number of surviving family members and I remain extremely grateful to those and who kindly agreed to share their family history with me. The information they provided not only filled many of the lacunae in the official record, but also lent much human warmth to the cold data. Equally important for the scholar concerned with understanding and historically reconstructing the quotidian experience of ordinary lives is the potentially large pool of new data this approach can provide.

Research using this method revealed that Souriya’s father Ayaht Khan was an ethnic Pashtun originating in the north-west of British India (now Pakistan). A farmer’s son turned lascar seafarer who landed in Britain, along with kin and comrades Ayaht moved inland to work as a boiler-firer in the Sheffield steel industry. His wife Hilda was the daughter of a Sheffield steelworks’ furnaceman who, at the time of his daughter’s marriage in December 1927, lived next door to Ayaht. Unfortunately, Hilda’s occupation is not known, although it is likely that, like many working-class Sheffield women, both married and single, she was employed in the city’s extensive and world-renowned cutlery and flatware industry. Such was the global reputation of the city’s metalworking industries that the cutlers Mappin and Webb even hosted a visit by King Amanullah and Queen Soraya (also often spelled Souriyah) of Afghanistan as part of their royal tour of Europe during 1927-1928. The Afghan monarch and his queen were, like Ayaht Khan, both Pashtuns and their widely reported visit to Sheffield most likely inspired the couple to name their daughter after the Afghan queen. The 1939 Register shows that eleven years later Hilda and Ayaht were living on the Manor estate, a newly-built municipal social housing project with their two children (they would have five children together). Here they took in Vina Brown as a lodger. Vina was a young native woman working as an emery glazer (women cutlery workers colloquially known as ‘buffer girls or lasses’). Also of interest is the record of Hilda’s parents provision of lodgings for Hawas Khan, another Pashtun migrant who, like both Ayaht and his Sheffield father-in-law, was employed as a steelworker.

Such domestic arrangements demonstrate that the networks and everyday connections between natives and newcomers could be much more embedded into the day-to-day life of the native working class than we might currently allow for. Moreover, my ongoing research into the relationships established between natives and newcomers is beginning to reveal that the composition of the South Asian newcomers’ social networks comprised not only their kinsmen (as currently understood), but also their native wives and families, friends, neighbours and workmates. Consequently, I argue that it was these wider social networks, made up of both newcomers and natives, that played a central role in the pioneering settlement of South Asian men, not only in the Sheffield area, but perhaps in Britain as a whole. The centenaries of the 1919-1920 port riots are fast approaching, as is the much less well known centenary of the first arrivals of South Asian migrant workers in Sheffield and their marriages to natives. As I hope my research demonstrates, studying migrants either in isolation from the native population or allowing the 1919-1920 riots to characterise their relations with natives will not provide the entire picture. Moreover, the findings illustrate the benefits of a more ‘sanguine’ research methodology which investigates the instances of co-operation and mutual, everyday tolerance between these two populations. Rather than obscuring or wilfully ignoring historical instances of racism and racial conflict, the approach aims to situate the pioneer migrants and settlers firmly within their immediate social contexts at domestic, neighbourhood and workplace level.

David Holland is a PhD student in the Department of History at the University of Sheffield and is currently completing his thesis. He is in receipt of a Wolfson Foundation for the Arts and Humanities scholarship.